Check out the last cryptic Tweet…. From just before His death:

Darren Seals, a well-known activist who protested in Ferguson after the police shooting of Michael Brown, was found shot to death in a burning car in Riverview, Missouri. 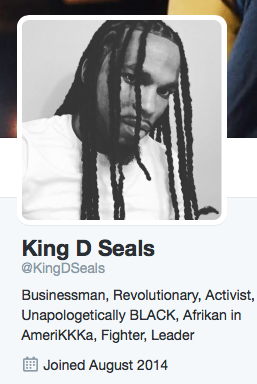 The St. Louis County Police Department has not released much information, but according to Uproxx, the Bureau of Crimes Against Persons unit was called at approximately 1:00 a.m. Sept. 7 with a report of a burning car in the city 10 miles outside St. Louis. The Bomb and Arson unit was then also called in and after putting out the fire, Seals’ body was found in the vehicle with a gunshot wound.

The New York Times reports that police have said Seals lived in St. Louis, approximately 12 miles from the Riverview scene. Authorities are investigating Seals’ death as a homicide; so far, no motives are known.


Seals, whose Twitter account described him as an “Unapologetically BLACK, Afrikan in AmeriKKKa, Fighter, Leader,” was 29 years old and worked in a factory, moonlighting as a musician. After police killed black teen Michael Brown in 2014, Seals become a prominent figure on Twitter, live-tweeting as he witnessed the aftermath, including seeing Brown’s body on the street. He soon became a well-known activist in the community, both in the days following Brown’s death and in the days following the decision of the grand jury not to indict Darren Wilson, the police officer responsible for Brown’s death.

The New York Times reports that Seals was once interviewed by MTV regarding the grand jury announcement. Seals referred to the decision as “the ultimate slap in the face.”

“And for Mike Brown’s mother to be right there in my arms crying — she literally cried in my arms — it was like I felt her soul crying,” Seals said. “It’s a different type of crying. I’ve seen people crying, but she was really hurt. And it hurt me. It hurt all of us.”

Seals’ latest tweets show support for 49ers quarterback Colin Kaepernick, who recently protested the national anthem by refusing to stand for it at a game.

St. Louis County Police Department is asking anyone with information on the crime to come forward.

Previous Are You Supporting Terrorism With Gas Purchases? These Companies Do NOT Import From The Middle East