Amid all the iconic photos of September 11, it’s easy to forget those on the periphery of the event—the people who came together in shock and sadness to watch and process what they were seeing. Photographer Robert Clark took some of the most widely published photos that day, including a series of four images he shot from his rooftop in Brooklyn that show the slow-motion collision of the second plane hitting the towers.

Now, on the 15th anniversary of the attack, Clark has shared with National Geographic a never before seen image from 9/11, one that shows the tender side of a day of horror as his neighbors gathered to watch the smoke rise, drawn together by a collective sense of confusion, unsure of what to do or where to go.

“The building was full of artists and hipsters and painters and sculptors, the kind of people who don’t get up early in the morning,” says Clark, who lived in Williamsburg at the time. “The roof started to fill up as we watched the towers collapse one at a time. Everyone just stared. The couple on the right was sitting there. The girl was lying down crying, and the guy was comforting her. At that moment, he leaned down and kissed her.” 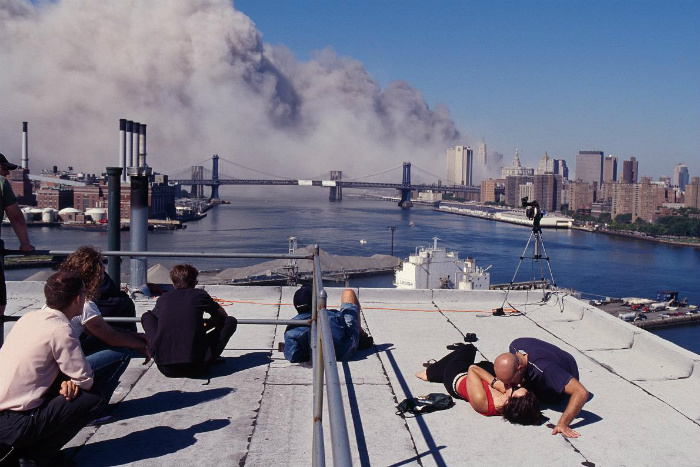 The image evokes another taken the same day, perhaps at the same time, by photographer Thomas Hoepker, who observed a group of five people on the Brooklyn waterfront as smoke rose from the fallen towers. He captured a moment when they seemed to look unmoved, even, judging from one woman’s pseudosmile, to be enjoying themselves (they weren’t, two people in the image later confirmed, and they didn’t appreciate the suggestion). Clark’s photo additionally might also be mistaken for a moment of lighthearted intimacy, a blithe kiss shared on a midmorning rooftop, had Clark himself not witnessed everyone on the roof squirm in shock and discomfort—the kiss was meant not to delight but to calm.