Is it just a case of bad timing, or are they trying to convince people that she is healthy? Her words are so eery and ironic!

The popular women’s magazine included a glossy photo of Hillary Clinton, and she appears to glow in discussing how she will work to help women as President.

Hillary’s words in the article are eerily prophetic.

When asked about the biggest obstacle she faced during her campaign, Clinton said it was the new media culture.

“In the heat of a campaign, in a culture that rewards brevity and clever phrases on social media, it can be really tempting to give simple answers to complex problems,” she said. “That’s never been my style.”

She asserted that she was “a little wonky” but believed in discussing specifics in her proposals.

Do you find it ironic that she used the phrase, “heat of the campaign,” and described herself as, “a little wonky?” For many, the irony is not lost. 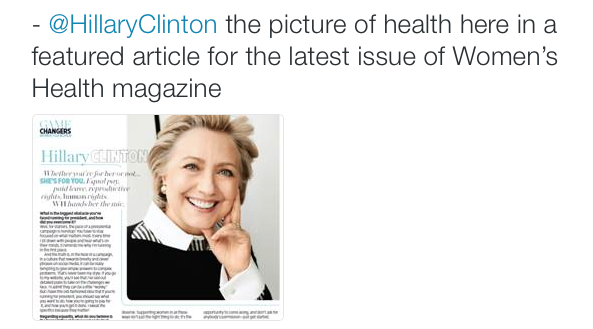 – @HillaryClinton the picture of health here in a featured article for the latest issue of Women’s Health magazine pic.twitter.com/lYqx4pPHkF

Not surprisingly, many of the reader comments are on point and hilarious!

@HillaryClinton NASA had to have been involved in this photoshop effort..

@HillaryClinton The only way she’s is the picture of health is through a heavy dose of Photoshop.

@whpresscorps She has been going out without even washing her hair…and then they try to sell us this is #CrookedHillary?

It truly is a nice picture. Do  you agree?

Next Saying "You Guys" Is Now A Microaggression At State College