A grammar school in High Wycombe, Buckinghamshire, has been slammed by parents and students for issuing pupils with a “homophobic” math question.

Royal Grammar School, an all-boys grammar, is under fire after a calculation containing unnecessary judgements about same-sex relationships was given to students by a school volunteer, according to the Bucks Free Express. 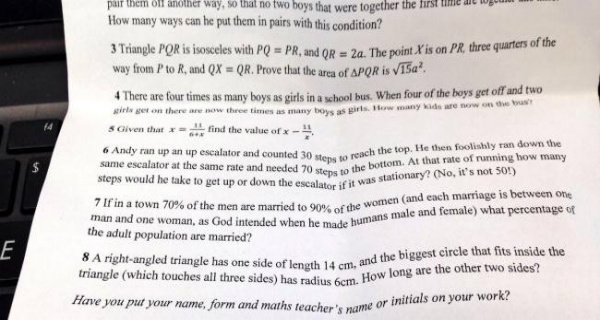 One parent rightly described the question as “homophobic” as having a clear “anti-LGBT bias.”


Royal Grammar School headmaster Philip Wayne apologized for the homophobic homework this morning (September 14), claiming the question was part of a test for higher-level students and was set by a teacher who retired “a long time ago”, but continued to volunteer at the school.

“I’m sorry on behalf of the whole school community of governors, staff and boys for any offence this has caused,” Mr. Wayne told Bucks Free Press.