He opened the door, grabbed the elderly passenger’s neck, and started punching. Nothing a Disabled War Veteran can’t handle! 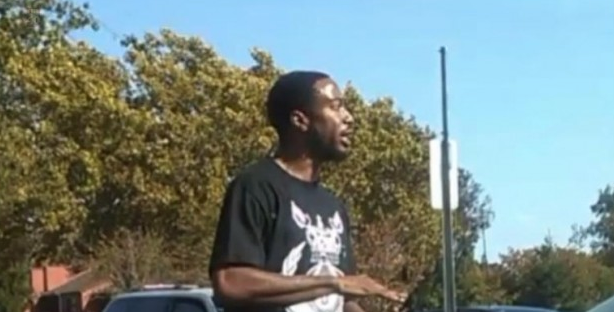 It all started when the unidentified man pictured above was accused of parking illegally. He became so inflamed that he opened the passenger door and started assaulting the elderly, disabled man.

“All of a sudden, the guy just attacked him — older gentleman,” Chris Benett, who witnessed the incident with his girlfriend Suzie Fowler, said. “Opened up his door, grabbed him around his neck, punched him a couple of times.”

Fowler added, “We have parents, too. It’s hard to imagine something like that happening to them. You don’t really think about your safety in that type of circumstance.”

Benett, who is a disabled veteran, came to the rescue of the elderly man. Meanwhile, Fowler started to record the incident.

The thug and his thugette girlfriend realized they were in trouble, so they shouted, “Stop recording!” before jumping in their car to speed away. Chris Bennett’s girlfriend, Suzie Fowler, threatened to release her pit bull if they did not scram, immediately.

Benett, for his part, is warning whoever the suspect is to turn himself in because “next time [he] might not be so lucky.”


Watch the video below:


Previous The Breastfeeding Yoga Mom That CRUSHED The Internet