Watch and decide for yourself. How could anyone deny this? Who is she pointing at?

Many articles have reported low turnout at Hillary Clinton rallies. 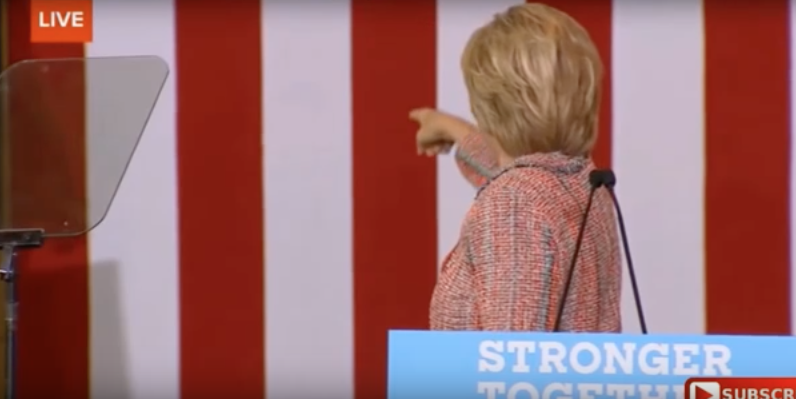 Here is what Victurus Libertas, the video’s producer, had to say:

Folks, you have to see this, I am not sure where Clinton was or even if it was the REAL Hillary. Not sure where the crowd was either. One thing I am sure is that the rally, according to this video – Was a FAKE. Check it out.


Hillary Clinton event in Las Vegas today, August 4th 2016, showing what the turn out is really like!!!!

Remember, this is Las Vegas, not a small town in Ohio!

She “apparently” edged out Bernie Sanders in Nevada. So where is everybody?

At a Hillary Rally in Pittsburgh, PA people were strategically placed in bleachers and along sidelines to give the appearance of a bigger crowd and where encouraged to cheer louder. Surge in Hillary’s Polls? More like Hollywood stage craft performed on a set.

Hillary Clinton is unable to fill this High school gym in Tampa, Florida. They cut the gym in more than half, put up a lot of staging, and pack the small areas with people to make it look like there is a big crowd for Hillary Clinton. This is her crowd with barely two months to go until election day and it is looking very bad for the Clinton camp.

So, Hillary is having a hard time filling venues. Too many empty seat.

How many people are turning out for Trump rallies? Here is what happened at the Estoro, Florida rally. A small town, obviously. Have you ever heard of it?

ESTERO, Fla. — The first of about 8,000 people expected for Donald Trump’s rally poured in shortly before noon Monday, when doors at Germain Arena opened to a throng that had waited outside for hours.

The event begins at 3 p.m. Free tickets ran out on Trump’s website Friday, and resellers were hawking them Monday for as much as $600 on Craigslist.

Security is tight, as Secret Service agents, the Lee County Sheriff’s Office and SWAT teams collaborate on the event. Authorities wouldn’t elaborate on their plans for traffic patterns in the area, but delays are expected, and drivers not attending the rally are cautioned to avoid the intersection of Ben Hill Griffin Parkway and Corkscrew Road.

The School District of Lee County advised parents that congestion could lead to afternoon bus delays.

The Trump event has no reserved seating, so spots are available to ticketholders on a first-come, first-served basis. Overflow parking is available in the adjacent Miromar Outlets lot.

Are you starting to get the feeling that the media, and obviously, the Clinton Campaign, have some serious explaining to do?

The phenomenon of small turnout for Hillary rallies is not a new one. Reports were that the entire Democrat National Convention consisted largely of paid protesters. Of course, in that case, they locked out the Sanders crowd.

Is the Clinton Campaign deceiving us? Decide for yourself…


Previous 4 More 49ers Dig Their Own Graves to Stand - Er, Kneel - With Kaepernick