“Miracle on the Hudson” survivor tells her side of the story after she relives the experience while watching the new film “Sully”. According to Maryann Bruce, the media and aviation has twisted the story to make it less horrific to keep people in seats.

From the view of aviation and media, the “miracle on the Hudson” was an “emergency landing” when in actuality, they had CRASHED. The engine was out and the back of the plane was ripped off, how is that not a crash?. Maryann says they use terms like “they didn’t land in the water”, “they landed on it”.  And with a simple twist of words, the public’s faith is flying is restored and the bottom line intact.

While a crash is what Maryann had experienced, she understands why it’s been dubbed what it has.  Either way, it still remains a miracle that all survived and for that Maryann is grateful.

Sully, the incredible true story of how a pilot landed a plane in the middle of New York City, has landed in the box office as successfully as Flight 1549 did on the Hudson River.

The Clint Eastwood movie about Chesley Sullenberger’s 2009 feat – which was dubbed the ‘Miracle on the Hudson’ after everyone on board survived – raked in $35.5 million on its opening weekend.

Now one of the passengers who survived the real-life accident has recounted that terrifying day.

And while Maryann Bruce approved of the Clint Eastwood film, in an exclusive interview with DailyMail.com she challenged the view that what happened was an emergency landing. 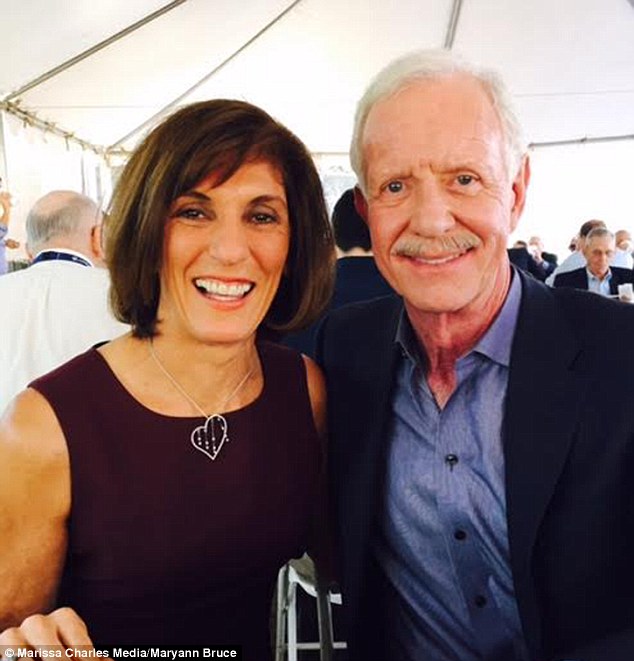 Maryann Bruce with Chesley “Sully” Sullenberger, who successfully landed a plane on the Hudson River after a bird strike caused both engines to fail. They are pictured on the day Clint Eastwood shot the reunion which appears at the end of the movie Sully

‘In the movie both Sully and [co-pilot] Jeff [Skiles] kept saying, “We didn’t crash. It was an emergency landing,” or, “We landed on the river, not in the river.”

‘And I’m like, wait a minute. This plane crashed. I don’t care what you say.

‘You go look at that plane the bottom is ripped to shreds from probably seat 14 to the back of the plane.

‘There’s no way that plane flies again because you lost an engine, the wings are on fire. How is that not a crash?’

But Maryann, 56, who is forever grateful that Sullenberger saved her life, says she understands why the media and the aviation industry want to label the incident, dubbed ‘the Miracle on the Hudson’, an emergency landing.

‘It was spin,’ she says. ‘They didn’t want it to be a crash because if it’s a crash, people get frightened. Think of how many people fly every day.’

Maryann recounted what it was like to be on US Airways Flight 1549 as the pilot told passengers to ‘brace for impact.’

And, remarkably, although she got emotional when she relived the accident on the big screen, she says she is not traumatized by the event and has no fear of flying.