Frank Hemani, a convenience store owner in Texas has grown upset over what he has been seeing in the world today. In an effort to help a certain group of people, Hemani put a shocking but heartwarming sign on his door that should encourage the world to do the same.

The ‘new rule” goes into effect immediately and he looks forward to putting it on the doors of each of his stores. Hemani simply wanted to solve a problem he felt was ignored, a picture of the gesture has since gone viral. 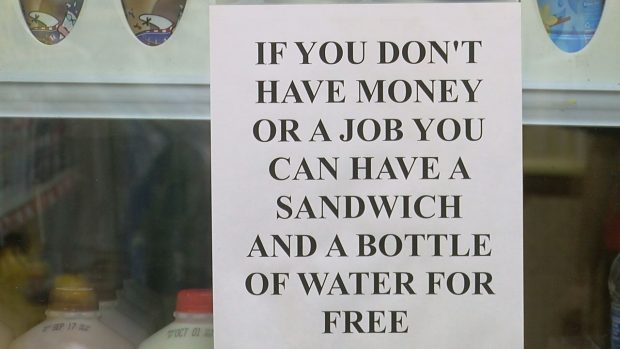 KLTV has the full story:

Water and a sandwich, that’s what one East Texas business owner says is all it takes to start a movement.

About two months ago, Frank Hemani, owner of the Star Mart gas station in the Lake Fork Community, near Emory, started offering those items an no charge at his gas station, for those in need.

Hemani says it’s not much, but says it’s the least anyone could do to help. Hemani and his employees are on a mission.

‘It’s just a couple of bucks, but somebody will not go to sleep hungry. If you don’t have money or a job, you can have a sandwich and a bottle of water for free,” says Hemani.

Hemani has posted a sign in his gas station that says, “If they are hungry enough, I will feed them. If they have children, or child, I’ll definitely give them something to eat.”

“Then we have ham and cheese sandwiches and sometimes he throws some of our breakfast tacos in here, as a little different they can have a choice,” says Andrea Wissman, one of Hemani’s employees.

Hemani got started on this mission two months ago after seeing a video where someone did something similar. He says it sparked something inside of him that he’s dealt with before.

“It’s really nice to help the community out because, there’s sometimes that maybe I went hungry. I don’t think the kids in this country or anywhere in the world has to wait for Christmas to get a good stuff and I think they should get it whenever they deserve,” says Hemani.

Hemani and Wissman say it starts with five to six sandwiches a week.
“We all go through hard times from time to time, so it’s nice to have something good,” says Wissman.