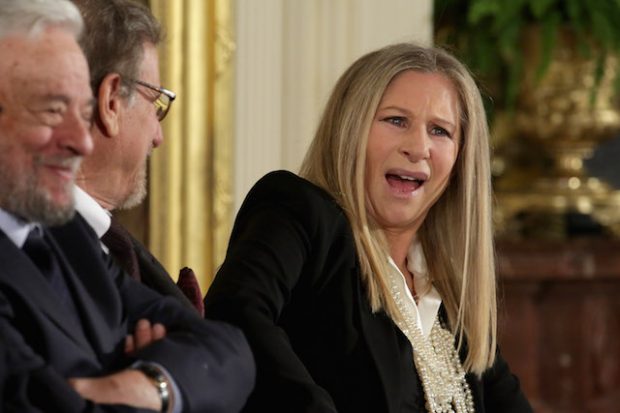 Liberal spokesperson Barbara Streisand just penned a scathing op-ed to the Huffington post regarding Trump. All Throughout the hot aired opinionated article, Streisand attacked Donald Trump about everything he is worth. She attacked his  business record, his physical appearance, the way he speaks. She even went after the media, (the same media that caters to the liberals,) but she accused them of  being too “entertained” to fact-check his statements.

According to PolitiFact, Donald Trump’s statements are rated ‘false,’ ‘mostly false,’ and ‘pants on fire’ 71 percent of the time,” Streisand said. “In other words, the majority of the time that Trump speaks, he is not telling the truth. But do the facts matter to Donald Trump or many in the media who are too entertained to correct his lies?”

When Trump throws around words like ‘crooked,’ he’s really describing himself and he doesn’t even know it,” she added. “In psychological terms, it’s called ‘the disowned self.’ Psychiatrists have explained how a person who refuses to recognize his own flaws will often project them onto other people.”

“What has Donald Trump ever done to serve others,” she continued. “He only cares about promoting himself. While Trump was being investigated and then sued by the Department of Justice for refusing to rent apartments to black and Hispanic people… Hillary was in Texas helping to register black and Hispanic voters.”

“One in five of his supporters believe slavery should never have been abolished and 61 percent believe President Obama wasn’t born in the United States,” she said. “For five years, Trump has wasted our time with his crackpot birther conspiracy theory. Only now he has suddenly had a conversion, but he doesn’t even have the decency to apologize.”

“And he has the audacity to say Hillary started it all… another outrageous lie,” she added. “He sounds like a child on the playground trying to escape punishment. He’s basically a bully, but like all bullies, he’s a coward at heart.”

“He skipped out on a debate because he didn’t like the moderator,” she continued. “He can’t handle the tough questions. He’s so thin-skinned that as soon as anyone challenges him, he sues them.”

“And Trump says Hillary doesn’t look presidential,” she said. “What does that mean… coming from a guy who looks like a raccoon in a tanning bed… with a flying squirrel on his head? That’s what a president is supposed to look like? A wrestler who dies his hair blonde?”

“We cannot allow America to fall into the hands of a narcissist who has shown no regard for anyone but himself… a bigoted and misogynist reality-TV character with no political experience and no qualms about lying loudly and often,” she added. “There is no equivalency between these two candidates. Only Hillary Clinton has the skills, the knowledge, the temperament and the compassion to lead this nation.”

After listening to the liberal insanity, this quote is what I think of. ..

“The object in life is not to be on the side of the majority, but to escape finding oneself in the ranks of the insane.” — Marcus Aurelius