When photographer Jayy Delarosa saw the exchange that took place between a black man and a police officer at a Texas McDonald’s, he new he had to snap a picture.

It wasn’t because the officer, Brazos County Sheriff’s Office Deputy Michael Calhoun, racially profiled the man or because he used excessive force for no apparent reason, as is often the narrative in the media.

It was because the officer bought the man’s meal as an act of unexpected kindness. 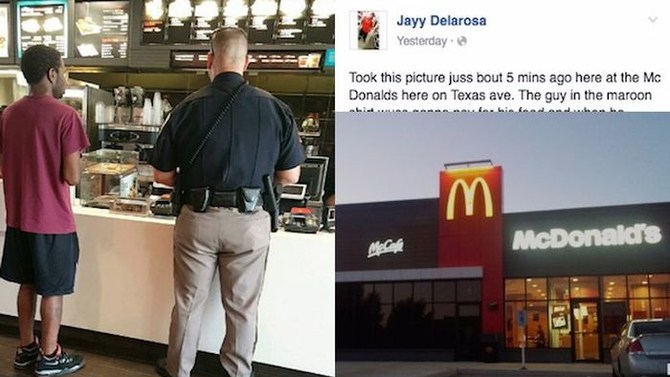 “Took this picture [just] bout 5 mins ago here at the Mc Donalds here on Texas ave,” Delarosa captioned the photo on July 11. “The guy in the maroon shirt [was] gonna pay for his food and when he pulled out his wallet the officer said “no man I got it. Get what [you] want” there is good police officers out there not all are bad. This touched my heart.”


A picture like this is worth a million words – especially with tensions running high between the black community and the police.

Share this story if you give Deputy Calhoun two thumbs up!

Next They Took a Selfie on Their Roommate's Phone, Then They Discovered His SICK Secret