Snakes On A Plane was just a movie. Imagine if you were relaxing in your seat when this “Snake On A Train” was discovered riding next to you!

A passenger, on a Japanese high-speed Shinkansen bullet train, noticed something odd wrapped AROUND THE ARMREST of another passenger’s seat. The rider must have turned around and then noticed the snake, as it was curled around the seat directly behind him. Imagine the horror, and the likely chaotic screams, when travelers on the train realized that a python had been riding along with them for almost an hour.

Thankfully, no one was injured during the chaos. Once the unwanted “stowaway passenger” was noticed, the super-express train was forced to make an unscheduled stop at Hamamatsu station. Railway police removed the snake in a minute or so.

Evidently everyone calmed down, and the high-speed train left Hamamatsu and was able to make it to the final destination, Hiroshima. 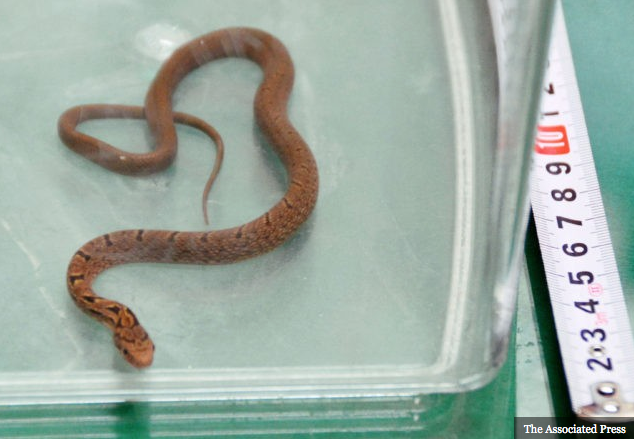 So, what kind of danger was actually posed to the riders of this bullet train? Pythons are non-venomous, and in almost every case they present no threats to humans. Some species grow large enough to possibly constrict and eventually kill a human, though that clearly was not the case on this train. Reticulated pythons, Burmese pythons, and a few others can grow to be large, and perhaps deadly.

Were the passengers in danger of being late in arriving at their final destination of Hiroshima. Not likely, given the speed of these amazing trains. The fastest train, called Nozomi Skinkansen, is said to take three to four hours to make the trip. Nozomi Shinkansens leave the Tokyo Station eight to ten times per hour, and cost about 18,500 yen to make the speedy trip.

Fortunately, no one was hurt in this Snakes On A Train event, and they all likely now have a pretty good story to tell.

Next Cam Newton's Pre-Game Shirt SHOUTS TO THE 'RACIST' WORLD