A video containing a creepy message for Obama and the White House has surfaced and it has the internet in a frenzie. The video seems to have come from Sweden after it was dropped off at a tech blog.

With its satanic imagery and hidden messages, the video shows a human figure dressed in a plague-era doctors outfit with an iconic bird-like mask and black shroud. Enough to freak anyone out.

The video is distorted and jumpy, but everything in it seems to have some sort of significance.

There are several hidden messages including morse code string and coded coordinates. Reddit has been hard at work trying to decipher it all and so far they have come up with the phrase “RED LIPSLIKE TENTH” from Morse Code. The coordinate puzzle results in 38.897709, -77.036543, which is the location of the White House.

When you first listen, it sound just like white noise, but a closer look reveals otherwise. The soundtrack reveals hidden images of the phrase “you are already dead” and what appears to be a woman being tortured, when using a spectrogram.

FREAKY. What do you think? A hoax or a legitimate concern? 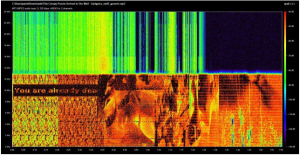 Next First Override of Obama's Presidency, Congress REJECTS his 9/11 Veto