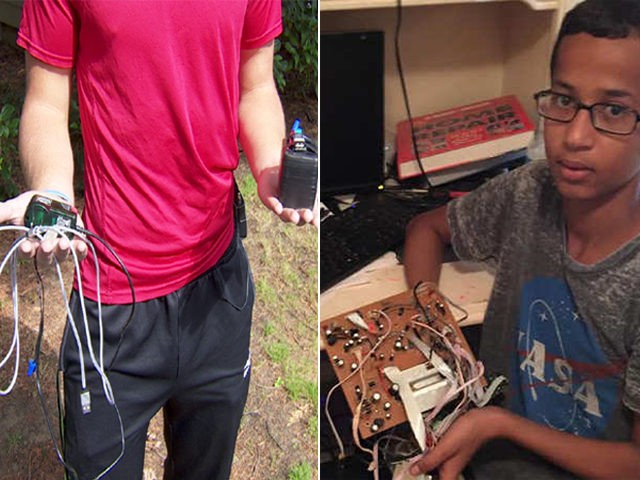 So Ahmed Mohamed, now known as “Clock Boy,” once put a clock in a box and took it to school. The teachers and administrators took immediate action to ensure the safety of their students. When Ahmed’s story broke, and became viral, he was invited to The White House, and got Presidential treatment for being shamed as part of an Islamophobic witch hunt.

Ahmed became famous, worldwide, and his father, Mohamed ElHasson Mohamed, was able to drum up international media attention, presumably for his poor, oppressed Muslim son. Ahmed even admitted that the clock looked suspicious before he took it to school.

Now we have the case of a Jewish boy, Levi Frunk, in Sandy, Oregon.

Levi is a bit of an inventor, and he improvised a homemade charging device for his phone. He took the device to school, and made the mistake of leaving the device out in the open, in a locker room, during a weight-training class.

Much like in Clock Boy Ahmed’s story, school faculty discovered the DIY device, and sounded the alarm. Again, they did so to ensure the safety of their students. Once the truth was discovered, things settled down in the locker room as no danger was presented.


So what of Levi? Did he get a White House invitation, or was he lauded as an oppressed hero?

Unfortunately, no. Levi got suspended from school and barred from participating in his homecoming football game.

All because he wanted to charge his phone.

In the end, Levi’s family laughed off the event, saying that he is a funny boy who invents things all of the time. Levi even confessed that he understood the situation and believes that his punishment is fair.

But is it truly fair? Why did Ahmed become a hero, who is now embroiled in a number of lawsuits?

It could be argued that this is a case of discrimination and anti-Semitism.

The problem: not everyone is a whiny attention-seeker.

Something to think about.