A Jacksonville Florida mom is demanding answers as to why her daughter was humiliated at her school, and  told she violated her school’s dress code policy.

Gabrielle Garcia is a 13 yr old student, and was put in in-school suspension for wearing a baby doll dress with leggings. Why? Because the dress didn’t reach her knees. There are inappropriate outfits, but this is not one of them.

Gabrielle’s mom said she dropped off her  daughter at Lavilla School of the Arts, and within moments received a phone call from her daughter saying she had been punished for a dress code violation. 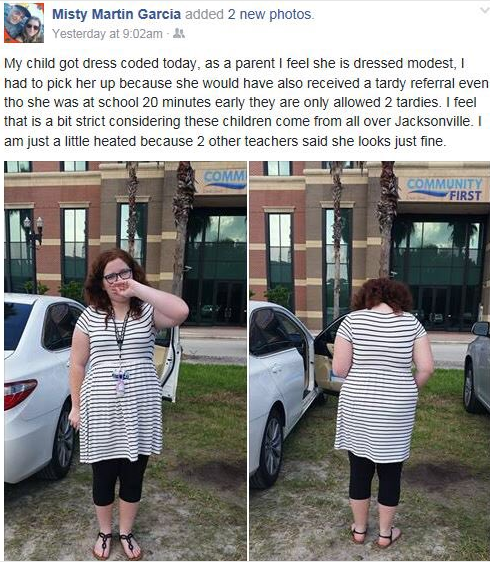 
“Honestly, if I would send her to church in something like this, I feel like she can wear it to school,” Misty told the news station after her post on the outfit went viral. The upset mother brought her daughter home so she wouldn’t also get a tardy citation from the school while waiting on the change of clothes since students are only allowed two tardies a year.”

Garcia took her concerns to Facebook and posted a message asking parents to weigh in on whether or not her daughter was dressed appropriately. Action News Jax sent emails and called Duval County Public Schools over this issue. It was through our investigation, this mom told us, the principal called to apologize about the misunderstanding.

Garcia said the principal agreed the dress should have passed school policy and said the administration will be addressing the teacher who wrote Gabrielle up.

The school board also sent us a statement that reads, “Duval County Public Schools has evaluated the situation and determined there was miscommunication between the office, parent, and student. School principal and parent have since resolved the misunderstanding.”

Even though the Principle sided with the student, she is still trying to make up for the time missed, and the humiliation she feels. I understand that there are dress codes, but this girl was nicely dressed. There is common sense that needs to prevail. I hope this girl never deals with this again.

What do you think? Was she dressed appropriately?

Next [WATCH] Bully Makes Tactical Mistakes, Latina Girl TURNS IT ON In An Instant