These photos are causing an uproar with Conservatives who have always supported Bush!

The Establishment, on both sides of the American political aisle, continues to demonstrate their distress at the success of Donald Trump.

Recently, we learned who Former President George H.W. Bush would be voting for:

George H.W. Bush Tells Who He Will Vote For, The Establishment Goes Crazy

It appears that he is not the only Bush who is making political waves.


Saturday, in Paris, France, Barbara Bush was spotted at a fundraiser for Democrat candidate Hillary Clinton. The event was even being hosted by Huma Abedin, estranged spouse of Anthony Wiener and Hillary’s top aide.

The photos of Bush, posing with Adebin and others, like socialite Derek Blasberg, are captioned with things like: “Hillblazing at home in paris #imwithher.”

Take a look at the images below: 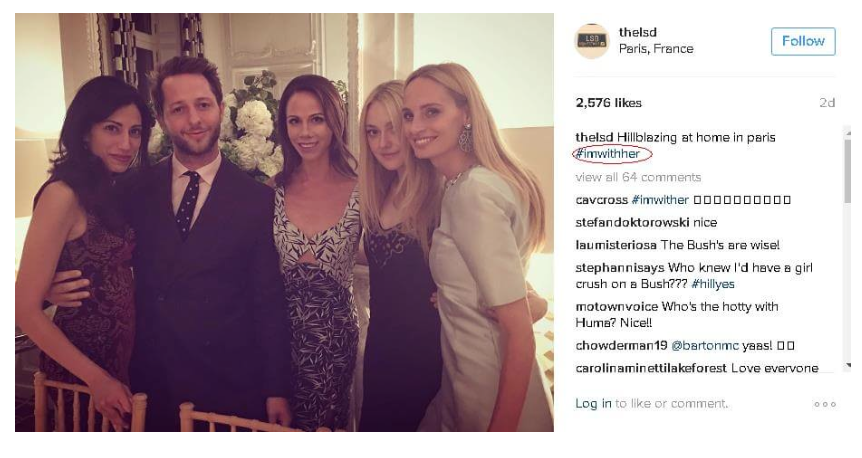 Barbara Bush looks fantastic, as do the others in the photos, but doesn’t this indicate an American political climate that has gone a little insane?

After all, it was Bill Clinton who actually beat George H.W. Bush in 1992, ending his highly-successful life in politics.

It was also the Clintons to threw rocks at President George W. Bush for years, starting with his controversial victory over Former Vice President Al Gore.

Are the Bushes “flipping” to Clinton because of Trump’s trouncing of Jeb Bush? Probably so. It is rumored that Jeb was groomed to be President all along, and that George W’s success surprised everyone.

Furthermore, could it be that our political establishment has grown so corrupt, so elitist, that neither the Clinton’s nor the Bushes can tolerate the success of an outsider like Trump?

Ten years ago, none of us would have EVER imagines things such as this.

It is a sign of the times, but what does this sign portend for the rest of us?