As Hillary continues with her attempts to tarnish her opponent’s reputation, her lies are making it increasingly hard to win the votes of the American people. One such lie she likes to use continually is the one where she grew up in the “struggling, working class” of America. New photos have surfaced and it’s been determined once again, she is a liar.

Last I checked, being raised in a house worth over half a million dollars is not considered the “struggling, working class’, especially in the 1950’s.

Hillary is completely out of touch with the average American and used her fake “struggle” to manipulate people into thinking that she “understands’ us. Give me a break.

SILENCE IS CONSENT had this to say: 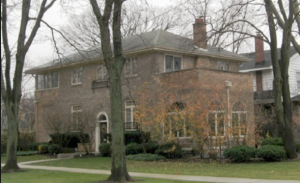 In speeches on the campaign trail, Hillary Clinton has portrayed her upbringing as “working class.” She talks about how her father eked out a living making drapery to support his family. A nice story, but a check of the facts proves otherwise. Hillary Clinton’s childhood home is proof she is misleading her supporters about her beginnings. In truth, her family was upper-middle class (at worst), and their wealth gave Hillary a good life, and an opportunity to attend Yale University.

Located at 235 N. Wisner St. in the affluent Chicago suburb of Park Ridge, the Clinton childhood home is a beautiful two-story house that her father paid for in full, in cash. He was the owner of a successful drapery business and did quite well.

Clinton was able to attend , a private women’s college in Massachusetts. She then went on to Yale, which, of course, all kids from working class families do. It was at Yale that Hillary met Bill Clinton. Hillary was raised a conservative Republican, but was radicalized in college and became a Democrat.


Previous [PHOTOS] Have A Look At Playboy's First Hijab-Wearing Playmate