On Monday two adults were found dead in their home Monday after the 7-year-old daughter notified Pennsylvania school officials that she was unable to wake her parents up.

The bodies of Christopher Dilly, 26, and Jessica Lally, 25, were discovered in the living room of the apartment by authorities, according to Pittsburgh Post-Gazette. Within the home, along with deceased parents, was a 9-month-old girl, as well as a 3-year-old and 5-year old boy. 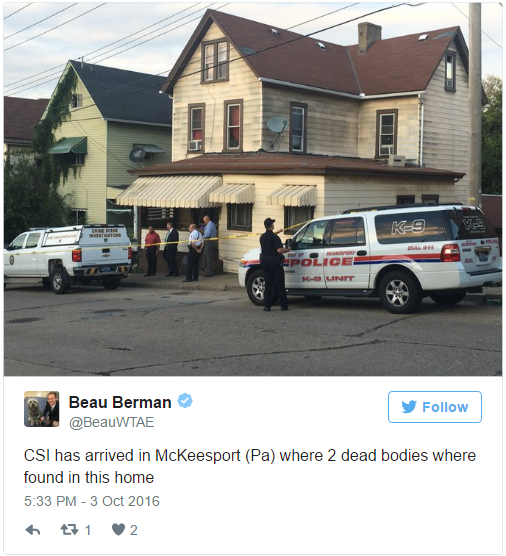 There was also evidence of drug use.

“Early indications are they may have been there for a day or two,” Lieutenant Andrew Schurman of the Allegheny County police told WTAE Pittsburgh.

This is apparently the second fatal overdose to occur on the same street in McKeesport, in which another man died of a heroin overdose.

“It’s getting ridiculous. This is three bodies in one day,” neighbor Jordan McCallister told WTAE Pittsburgh.

The nearby mayor of Braddock, Penn. (who ran for the U.S. Senate) expressed his grief over the incident. 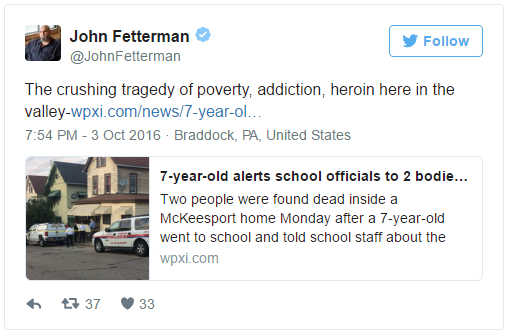 This tragic incident is similar to one that occurred in Ohio, where two parents were pictured passed out in the front seat of a car with a young child in the back seat.