A woman who says she was a victim of child rape blew up on Hillary Clinton minutes before the second presidential debate got underway.

Kathy Shelton, now 54, said she was raped when she was 12 by a factory worker on the side of a rural road in Arkansas. Clinton, who defended the factory worker, had his charges reduced from first-degree rape to “unlawful fondling of a child under 14″ and he served just 10 months in prison.

In a series of tweets Sunday night, Shelton blasted Clinton for claiming she was an advocate for women and children.

“Hillary Clinton an advocate for women & children? Not even close,” Shelton tweeted. “She terrorized me during my rape case & later laughed about it.” 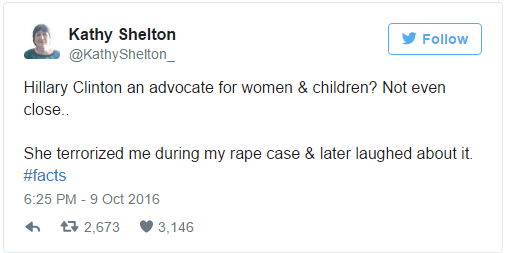 “If I’d had justice vs my rapist, maybe I could have healed. But Hillary Clinton made sure I suffered loss of justice, then laughed it off.”

“Hillary Clinton is a cold-hearted liar. The lies she told about me, 12 yr old rape victim, traumatized me nearly as much as the rape itself.” 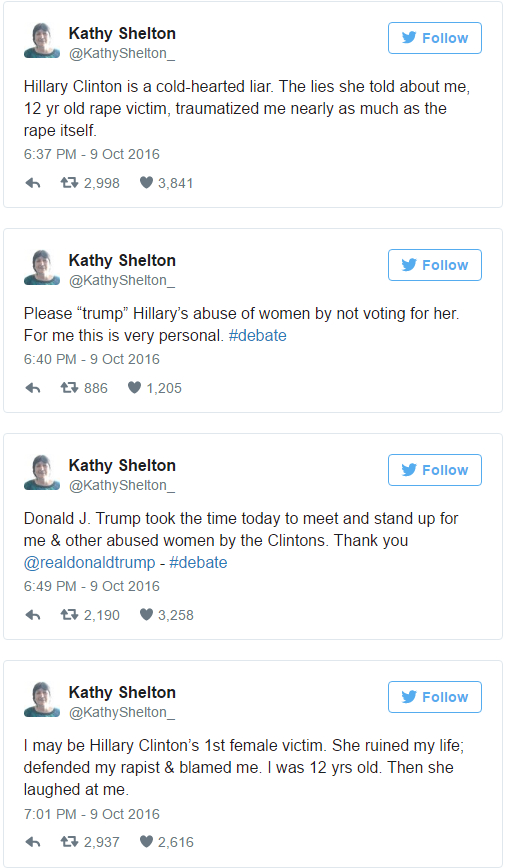 Donald Trump held a mini-presser with Shelton, Paula Jones, Juanita Broaddrick, and Kathleen Willey before the debate in St. Louis. They will all reportedly be in the debate hall tonight.