WikiLeaks just dropped their 6th Data Dump, just on the heels of Hillary’s Campaign Manager Having his Twitter and Email hacked, AGAIN!

Among them are juicy tidbits such as “Invitations to the mansion of George Soros…” and more!

Rest assured, journalists are pouring through this 6th batch of messages, which brings the total to over 9,000.

After the 5th release yesterday, “The Podesta Emails, Part 5,” Hillary’s Campaign Manager, John Podesta, found himself in hot water yet again, as both his Twitter and Email accounts were hacked.

A group calling themselves 4chan used data found in the 5th release to take control of Podesta’s accounts and did their best to exploit them.

Hillary, Podesta, and their team found out that they had been comprised when Podesta’s Twitter erupted with the Tweet, “I’ve switched teams. Vote Trump 2016. Hi pol.” 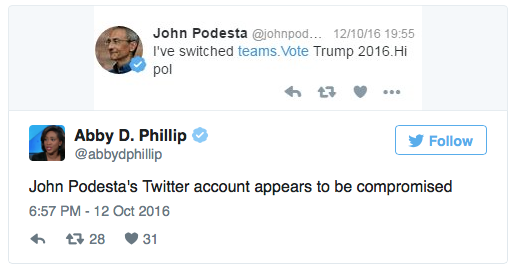 Clinton’s Press Secretary, Nick Merrill said, “We can confirm that John’s Twitter account was hacked, which would explain that message. We are working on fixing it.”

Podesta’s iCloud login credentials were found within the WikiLeaks emails, giving hackers the opportunity to have some fun.

Realistically, this proves the credibility of WikiLeaks. The Clinton Campaign has tried to claim all along that WikiLeaks is lacking in accuracy and credibility. Apparently not, in this case.

Hillary and Podesta continue to claim that the hacking is a result of Russian collaboration with their opponent, Donald Trump.  There is little evidence to support that particular assertion.

The Presidential Election of 2016 was crazy to begin with, and the last remaining weeks appear to be on a course that will veer completely off of the tracks.

Are you ready for a break from all of this? Many Americans are!