She was pronounced dead at the University of Kentucky Medical Center. Police are searching for answers 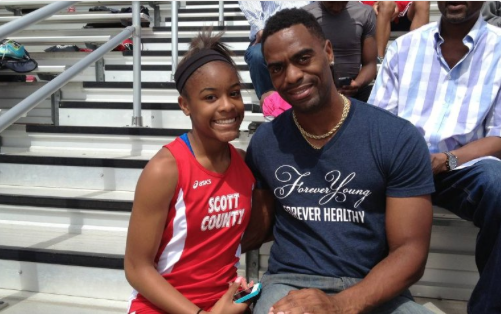 Police officers arrived at the parking lot of a Lexington restaurant at about 4AM Sunday morning, in response to reports that shots had been exchanged between two vehicles. Officers stopped two people for questioning, though the details of the shooting are still unclear.

The sad result: Trinity Gay, the 15-year-old daughter of Olympic track athlete Tyson Gay was fatally shot in the exchange and has been pronounced dead.  Tyson Gay’s agent, Mark Wetmore, confirmed the girl’s death in a text message to The Associated Press.

Police do not believe that Trinity Gay was in either of the vehicles at the time of the shooting. They continue to search for the second of two vehicles alleged to be part of the shooting incident.


Trinity Gay was a student at Lafayette High School, like her father. Tyson Gay still holds the State Record in the 100 meter dash, a mark he set in 2001.

Trinity was also a sprinter, finishing fourth in the 100 meter and fifth in the 200 meter races at the State Class 3A high school track meet.

The Track & Field Community, nationwide, is sending their condolences to the Gay family.

A tweet from Kentucky High School Athletic Association Commissioner Julian Tackett said he was stunned by the death: “Shocked to hear of death of Trinity Gay. A life of such potential cut so tragically short. Sympathies to Tyson and entire family.”

USA Track and Field also tweeted, “Sending our thoughts & prayers to @TysonLGay & his loved ones as they mourn the tragic & senseless loss of his daughter, Trinity.”

Trinity wanted to be the fastest woman on earth.

Our thoughts and prayers go out to the Gay family during this tragic time.

We will provide updates on the story as we have them.

My heart goes out to Tyson Gay and his family over the death of his 15-year-old daughter, Trinity, who was shot & killed in Kentucky


Previous 30 Harmless [PHOTOS] Proving You Have A Dirty Mind!

Next Rudy Giuliani Agrees With Trump on Rigged Election, Then Drops Bombshell about DEAD Voters