Chicago has decided to take their high murder rate more seriously and Amazon is complying with their ridiculous demands. City ordinance absolutely ban anything that could resemble “Replica firearms and pellet guns”, and Amazon has taken it upon themselves to partner with Chicago gun banners and not ship orders of children’s TOYS to this area.

Talk about the striping of liberty and freedom with the help of huge corporations!

The DC has the full story:

Amazon.com will not deliver a toy cowgirl playset to Chicago residents, apparently because of a municipal law in the city forbidding replica toy firearms.

The hot pink ensemble — “everything a kid needs to be a ‘real’ Western cowgirl!” — comes with a child-size cowgirl hat, a holster festooned with a silhouetted horse and rider and a six-pointed badge with a shirt clip and space for a name.

There’s also a silver and pink cap gun among the accessories.

However, Amazon explains to Chicago residents: “This item cannot be shipped to your selected location.”

The law upon which Amazon relies to refuse sales of the cowgirl playset is presumably §4-144-190 of the Chicago Municipal Code. The ordinance, titled “Replica firearms and pellet guns” bans the possession and transfer of “any device, object or facsimile made of plastic, wood, metal or any other material, that a person could reasonably perceive as an actual firearm but that is incapable of being fired or discharged.” The strict law specifically encompasses lighters, camera and mobile phone cases — but makes an exception for certain antique firearm replicas (and for paint pellet guns at paintball parks).

Violators of the law can be fined up to $750 and imprisoned for as long as six months for each offense.

Amazon.com did not respond to The Daily Caller’s request for comment by press time.

In addition to the cowgirl playset, Amazon also refuses to deliver many other toy guns to Chicago residents.

Among the toy guns Amazon won’t send to the Second City is the “Legends” pop gun by Zing Toys. “With a loud pop and retractable cap, it’s easy to use! Just pull the handle back and push forward to make it pop!” “Best for age 4 years and up.”

Chicagoans won’t be receiving the BuzzBee pirate flintlock foam dart blaster, a set of two police-style toy cap guns, a 9-piece police practice set (including a “pump-action shot gun” and a walkie talkie), or the Kidslove sound-and-light machine gun, either. 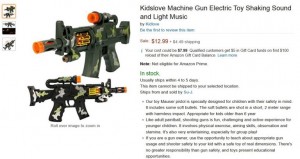 Interestingly, despite Chicago’s tough laws against toy guns and despite Amazon’s policies, pop-up Halloween costume stores within the Chicago city limits are currently selling an absolute bevy of replica weapons which seem to blatantly violate the city ordinance against replica gun toys.

Here are a few examples: 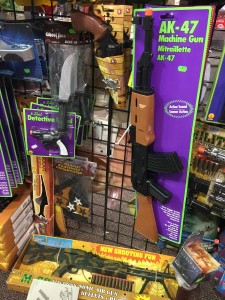 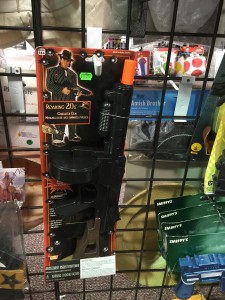 There have been at least 571 homicides to date in the city this year, according to police department data collected by DNAinfo. Of the 571 homicides, 510 have involved guns.

The 510 murders involving real guns do not also appear to have involved fake toy guns designed for children to engage in pretend play.