TAMPA — Amy Schumer presented her comedy show at the Amalie Arena this past Sunday, Oct. 16, 2016. Around 10,000 of her fans showed up to see the comedian, but it was in the middle of the show that it turned political and hundreds chose to leave because her attacks against presidential candidate Donald Trump.

Schumer called Trump an “orange, sexual-assaulting, fake-college-starting monster,” according to a Tampa Bay Times article. She also opened up to the crowd about being a victim of sexual assault, adding that she could not understand how anyone could vote for Trump after the recent sexual assault allegations that surfaced.

Schumer has made it known that she is a Hillary Clinton supporter, and invited a Trump supporter on stage to explain his reasoning for voting for Trump. The audience member explained that he did not trust Clinton. 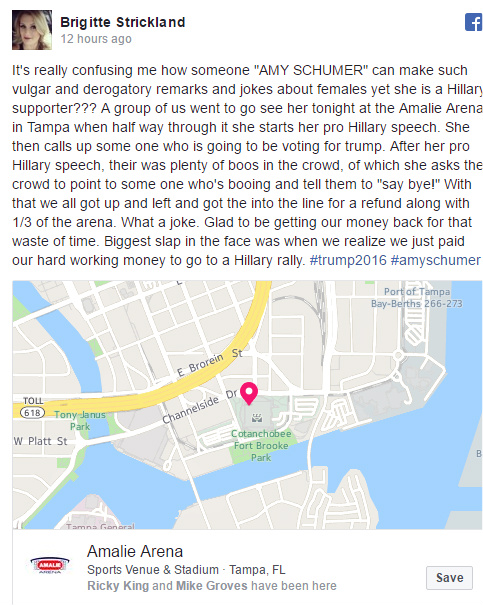 A YouTube video posted by YouTube user MommaPayne shows Schumer getting booed by members of the audience after making comments about Trump. It was estimated that about 200 people walked out of the show as she continued to mock Trump.

Previous WIKILEAKS: Email Exposes Hillary’s ‘ROTHSCHILD Connection’, THEY OWN HER

Next 911 Operator Hangs Up on THOUSANDS of Callers, Wait Till You Hear Why!