She definitely won’t ever be going forward with anyone after this. Some said the stench was so bad, HAZMAT had to be called to contain the poop and toilet paper from going into storm drains. DISGUSTING and they should be ashamed of themselves.

WND has the full story:

It looks like properly disposing of No. 2 is not Hillary Clinton’s No. 1 priority.

A Clinton campaign “Forward Together” bus has been caught dumping foul-smelling human waste into a storm drain in Lawrenceville, Georgia, according to several reports.

“Police say when they arrived on the scene, toilet paper was scattered everywhere and there was a foul smell,” reported Atlanta’s WGCL-TV 46.

Local businessman Mike Robins snapped several photos of the bus dumping the stinky waste into the street and down the storm drain.

Robins told Lawrenceville Police he saw someone get out of the bus bearing images of Mrs. Clinton and her running mate Tim Kaine and dump “its sewage into the storm drain,” according to an incident report.

In close-up images, what is likely a mixture of liquid feces, urine and toilet paper can be seen oozing from the bottom of the bus. 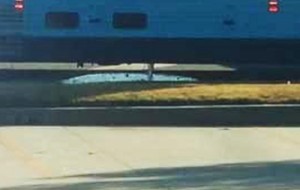 A HAZMAT crew reportedly had to be called in to clean up the mess.

A DNC spokeswoman called the fecal matter “an honest mistake”:

This was an honest mistake and we apologize to the Lawrenceville community for any harm we may have caused. We were unaware of any possible violations and have already taken corrective action with the charter bus company to prevent this from happening again. Furthermore, the DNC will work with the Georgia Department of Natural Resources, as well as local and state officials to determine the best course of corrective action.

WGCL noted that the State Environment Protection Department and Gwinnett County Storm Water are now involved in the investigation into the dumping.