According to the FBI, these items and symbols are frequently used by pedophiles so they can identify each other. Even more scary, they are hiding in plain sight.

Become familiar with these symbols/items and watch out for your kids. 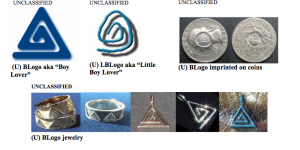 (U) The GirlLover logo (GLogo) depicted below is a small heart surrounded by a larger heart, which symbolizes a relationship between an adult male or female and minor girl.

(U) The ChildLover logo (CLogo), as shown below, resembles a butterfly and represents non-preferential gender child abusers. The Childlove Online Media Activism Logo (CLOMAL), also represented below, is a general purpose logo used by individuals who use online media such as blogs and webcasts.4

(U//LES) FBI investigations in several cities have uncovered several symbols used by pedophiles to proclaim their attraction to children. After a seizure of a subject’s computer in connection with an Innocent Images case in the Jacksonville Division, a Computer Analysis Response Team forensic examiner came across an unfamiliar symbol that was integrated into a Web site banner named “ATBOYS.COM, where the “A” in “ATBOYS” was actually the BoyLove symbol and written as follows: TBOYS.com. It was further determined that “ATBOYS” is an acronym for Attracted To Boys.5 These pedophilia symbols also appear on Web sites such as one of the banners advertised on www.boylover.net, shown below.

Next New Emails Reveal: Hillary REFUSES to Speak Without a Podium, This is the Answer We Have Been Waiting For