Is this woman’s t-shirt offensive? Many believe the NBA got it wrong this time. They cancelled her two-minutes before showtime!

This professional singer from Atlantic Recordds was all set to sing the National Anthem, and was told that her clothing was not allowed.

Her name is Sevyn Streeter. She was to sing the National Anthem as part of the opening of a game between the Philadelphia 76ers and the Oklahoma Thunder.

“I’d say two minutes before we were about to walk out… the organization told me that I could not wear my shirt while singing the national anthem at their game. I was never given any kind of dress code. I was never asked beforehand to show my wardrobe.”

Was suppose to sing the anthem at @sixers & @okcthunder game but mins b4 @sixers said I couldn’t because I was wearing a “We Matter” jersey pic.twitter.com/wjoJN3rq0r

The Philadelphia 76ers did not comment, specifically, on the Streeter issue, but did issue this statement:

“The Philadelphia 76ers organization encourages meaningful actions to drive social change. We use our games to bring people together, to build trust and to strengthen our communities. As we move from symbolic gestures to action, we will continue to leverage our platform to positively impact our community.”

A member of the Sixers dance team sang the National Anthem as a substitute for Sevyn Streeter.

Did the Philadelphia 76ers make the right call?

I see nothing wrong with the statement on Streeter’s shirt but understand that the issue is controversial and annoying.

Black Lives Matter and related protests have caused problems, everywhere from the Interstates to the NFL. It would be nice if we could all move on.

Perhaps this move by the NBA and the Philadelphia 76ers is a first step in that direction? 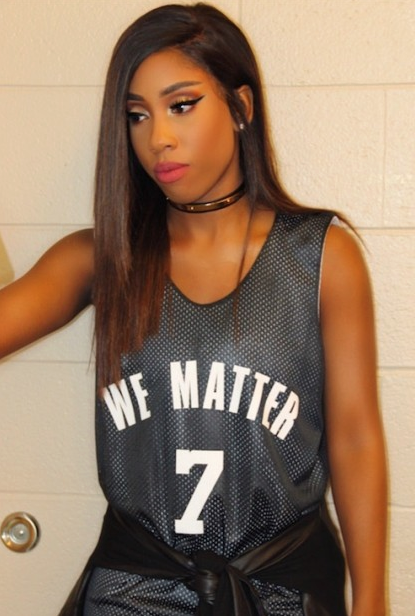