What seemed like a cut and dried case of car theft ended up being much more.

Erin Hatzi’s surveillance cameras caught a woman come up to Hatzi’s red Subaru, climb in and take off a few minutes later.

“We were really confused because it didn’t seem like the normal actions of a car thief,” Hatzi said. “You wouldn’t think they’d sit there in idle in the owner’s driveway for two or three minutes.”

Hatzi filed a police report. But it didn’t take long before she started getting answers.

Her husband was taking the garbage outside Wednesday afternoon when a Portland police officer had a woman stopped right outside Hatzi’s home. The woman had just gotten out of Hatzi’s red Subaru and left a note and some cash inside.

The note explained how the woman had gone to the area to pick up a friend’s red Subaru as a favor and ended up taking the wrong car. Hatzi posted the note on Facebook.

“Hello, So sorry I stole your car. I sent my friend with my key to pick up my red Subaru at 7802 SE Woodstock and she came back with your car. I did not see the car until this morning and I said, ‘that is not my car.’ There is some cash for gas and I more than apologize for the shock and upset this must have caused you. If you need to speak further, with me, I am ******* and my number is ……….So so sorry for this mistake.” 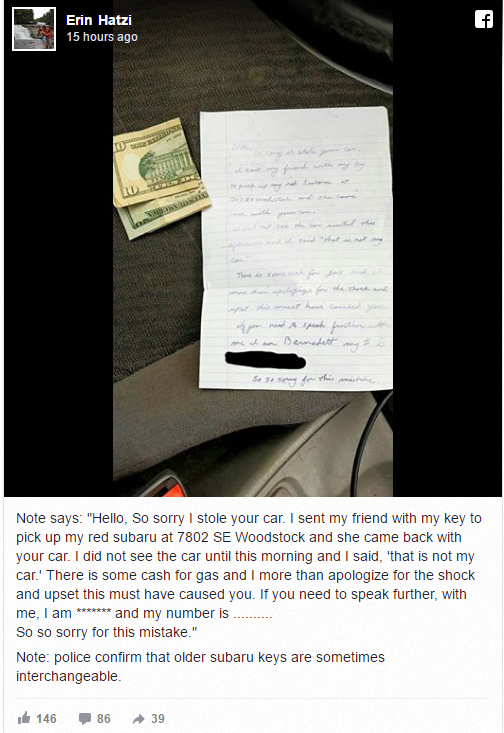