As the media continues to focus on Trump and what he did 11 years ago, Obama and Hillary have been linked to treason and not a peep. Because of Wikileaks and Assange, we have been able to prove their crimes  over and over again.

New emails released prove not only treason but the connection between Hillary and ISIS than we originally believed. It is clear that Hillary and Obama have chosen personal gain instead of eliminating a TERRORIST GROUP.

ETF had this to say:

An email was leaked between Clinton and John Podesta indicating that: “Western intelligence, US intelligence and sources in the region” to accuse Qatar and Saudi Arabia of “providing clandestine financial and logistic support to ISIL [or ISIS] and other radical Sunni groups in the region.”

Citing the need to “use our diplomatic and more traditional intelligence assets,” said Hillary to Podesta while arguing the current developments in the Middle East were “important to the U.S. for reasons that often differ from country to country.”

In another correspondence from 2012, the Director of Foreign Policy at the Clinton Foundation, Amitabh Desai, set up a meeting with Bill Clinton for five minutes in exchange for a $1,000,000 “birthday check.”

The email adds that the small but rich nation occupying the Qatar Peninsula would “welcome [the Clinton Foundation’s] suggestions for investments in Haiti — particularly on education and health.” Desai added that while Qatar had already “allocated most of their $20 million … [they were] happy to consider projects we suggest.” 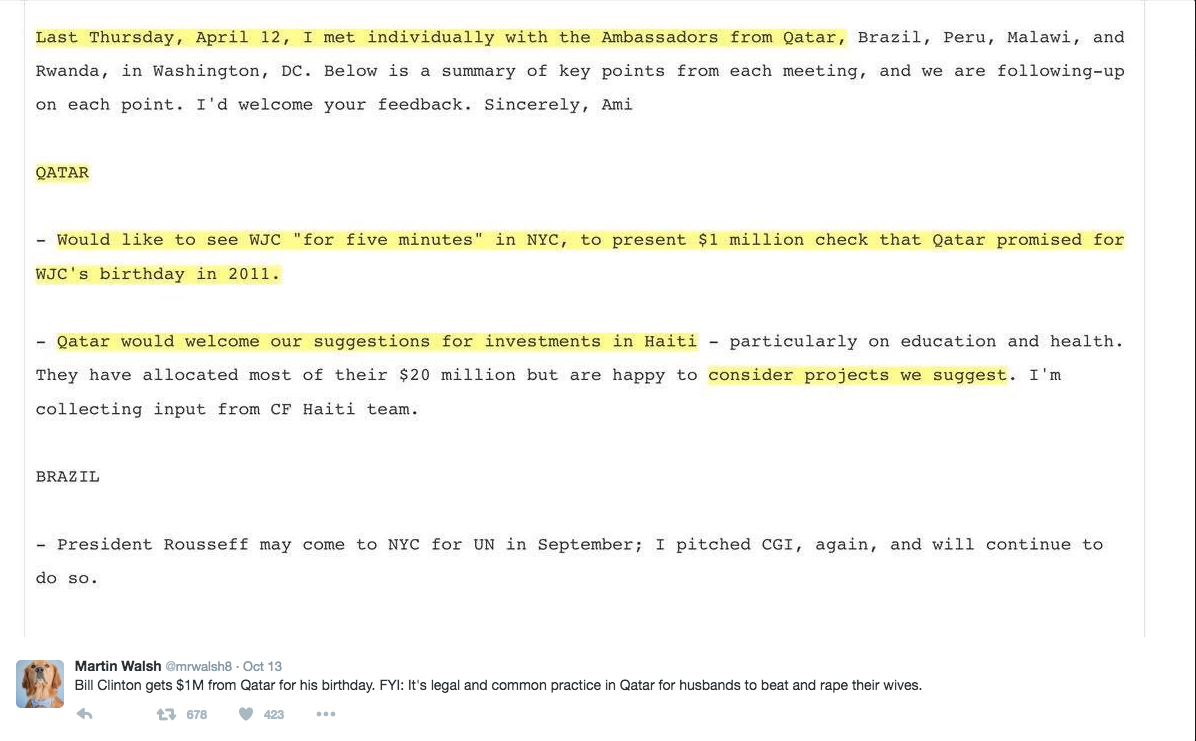 We now see two more examples of the Clinton’s acting corrupt and being intertwined with nations that fund ISIS.

For those that do not see where the dots connect, let’s simplify how this all worked for Hillary.

Hillary, as Secretary of State, would sell terrorist nations large weapons deals only after they gave her a very generous donation to her “foundation.” These weapons, provided by Hillary and her State Department, then filtered down from Saudi Arabia, Qatar, Libya, and so on to create, supply, and bolster terrorist groups.

That is exactly how ISIS was created. But instead of blowing them up with an air assault, Hillary and Obama decided to leave ISIS alone. Why? Because ISIS being in the Middle East allows the Obama/Clinton machine to make millions in personal profits from these nations in a repetitive cycle of selling weapons.

Previous [VIDEO] TRUMP Campaign Manager: “We Can Never Get the Stench of the Clintons off of Us"

Next 20 Boyfriend's and 20 iPhone 7's, How One Woman Bought a House