It is unprecedented for a message of this magnitude to go to Congress on a Sunday, but these are extraordinary times…

This is going to anger many, many people.

Rep. Jason Chaffetz (R-UT) sent out a tweet today explaining that FBI director James Comey informed him that there had been no change in the conclusions the FBI had in the investigation into Hillary Clinton’s emails.

FBI Dir just informed us “Based on our review, we have not changed our conclusions that we expressed in July with respect to Sec Clinton”

Take a look at Comey’s letter below: 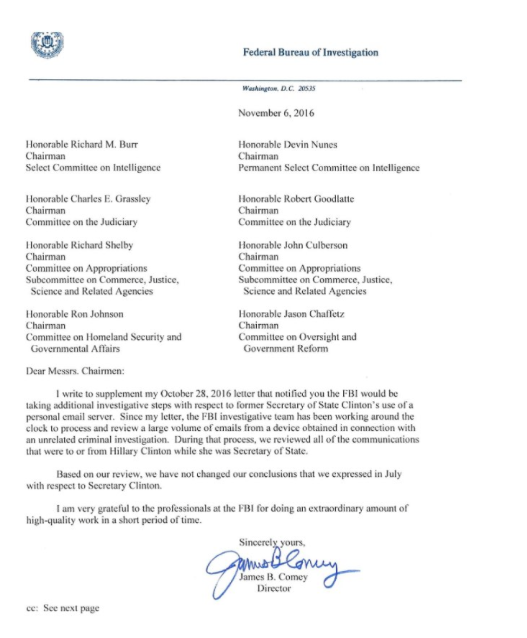 FBI Dir just informed us “Based on our review, we have not changed our conclusions that we expressed in July with respect to Sec Clinton”

@Acosta @Fahrenthold So, the first letter was completely pointless, except for the political impact of it.

It was reported after Comey sent the initial letter saying new information had come out that it was related to Anthony Weiner and the investigation into his sexting. Weiner shared a laptop with his estranged wife Huma Abedin and it was stated that a number of emails related to Clinton were on the laptop.

It has been reported that the Department of Justice has been obstructing the FBI’s investigation. Of course, many will say that the system is rigged and that Comey’s announcement is a political one.

Unfortunately, for Hillary Clinton, and the rest of the establishment, WikiLeaks, Anonymous, and the others are not going to stop.

It is also being reported that Congress has a copy of all 650,000 emails, so you can bet that this issue is not totally finished.

Do you believe the system is rigged?