The man who caused a Secret Service scare in Reno, Nevada is a Hillary supporter. WikiLeaks has EXPOSED the TRUTH about him!

By now, most everyone has heard about the scare that took place a Trump Rally in Reno, Nevada.

A man, who we now know is named Austyn Crites, was reported to have been seen with a gun. The Secret Service rushed the stage, securing Donald Trump, while others subdued Austyn Crites.

Crites is a known Hillary Clinton supporter. Take a look at excerpts from his Facebook page: 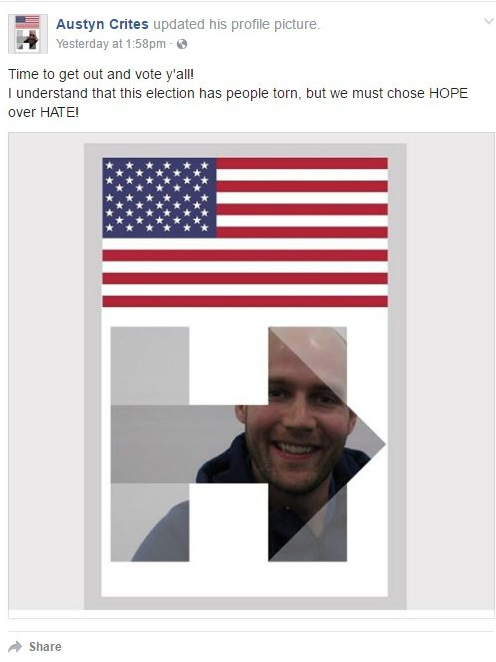 “Time to get out and vote y’all! I understand that this election has people torn, but we must chose HOPE over HATE!

Obviously, Austyn Crites wanted to do more than just vote. Though no gun was found at the scene, eyewitness swear that they saw something. It is being reported that a Crites’ cell phone disappeared in the ruckus. Perhaps other objects disappeared into the crowd with an accomplice, as well?

Now, we know that the name Austyn Crites appears in the WikiLeaks files 7 times!

His name does not appear in the Podesta Emails, however. It is found in the WikiLeaks Global Intelligence Files. What are these files? The WikiLeaks site describes them like this:

On Monday February 27th, 2012, WikiLeaks began publishing The Global Intelligence Files, over five million e-mails from the Texas headquartered “global intelligence” company Stratfor. The e-mails date between July 2004 and late December 2011. They reveal the inner workings of a company that fronts as an intelligence publisher, but provides confidential intelligence services to large corporations, such as Bhopal’s Dow Chemical Co., Lockheed Martin, Northrop Grumman, Raytheon and government agencies, including the US Department of Homeland Security, the US Marines and the US Defence Intelligence Agency. The emails show Stratfor’s web of informers, pay-off structure, payment laundering techniques and psychological methods.

Why would Crites appear in WikiLeaks, then show up at a Trump Rally to be found in a ruckus?

When you put this all together, it’s pretty hard not to think about the Project Veritas videos.

The Project Veritas videos put Scott Foval and Doug Creamer in the spotlight, and both had FEC complaints filed against them due to their unscrupulous methods of “helping” the Clinton campaign.

Breitbart.com reported on this particular quote from Scott Foval, where he explains “bird-dogging”:

FOVAL: So one of the things we do is we stage very authentic grassroots protests right in their faces at their own events. Like, we infiltrate. And then we get it on tape. And then, when our guys get beat up —

PV: So like — progressive, what we saw in Madison.

FOVAL: We train up our people, wherever they are, to — and I work with a network of groups, we train them up on how to get themselves into a situation on tape, on camera, that we can use later.

PV: So some of this, so I probably know your work.

FOVAL: I know you do. Everybody does. But —

FOVAL: You remember the Iowa State Fair thing where Scott Walker grabbed the sign out of the dude’s hand and then the dude gets kind of roughed up right in front of the stage right there on camera?

FOVAL: That was all us. The guy that got roughed up is my counterpart, who works for Bob [Creamer].

PV: And so you, like leant yourselves to that situation and it happened. A self-fulfilling prophecy.

It makes sense. Yet another last minute example of inciting violence in the name of politics.

It has been part of the Clinton game plan all along, hasn’t it?

Next The LYING Media Summed Up In A Single PHOTO