All eyes are on the swing states this election cycle. The crucial battleground states that will go either Republican or Democrat. These states have been in contention before, and they will play a major role in tomorrow’s election.

Just days ago CNN had Clinton taking it away in electoral votes, but new information today has things shifting a bit. A new electoral map has come out, and it has Trump on a track to possibly win the Presidency. Just a few shifts here and there can make all the difference.

The battleground map is shifting once again in Donald Trump’s favor, according to the latest Fox News Electoral Scorecard, portending a potentially tight race Tuesday against Hillary Clinton, who continues to hold the electoral-vote advantage.

According to an update to the scorecard released Monday, Clinton can still get to the necessary 270 electoral votes by winning all the states rated “solid” or “leaning” Democratic.

But just barely. Doing so would get Clinton to 274. 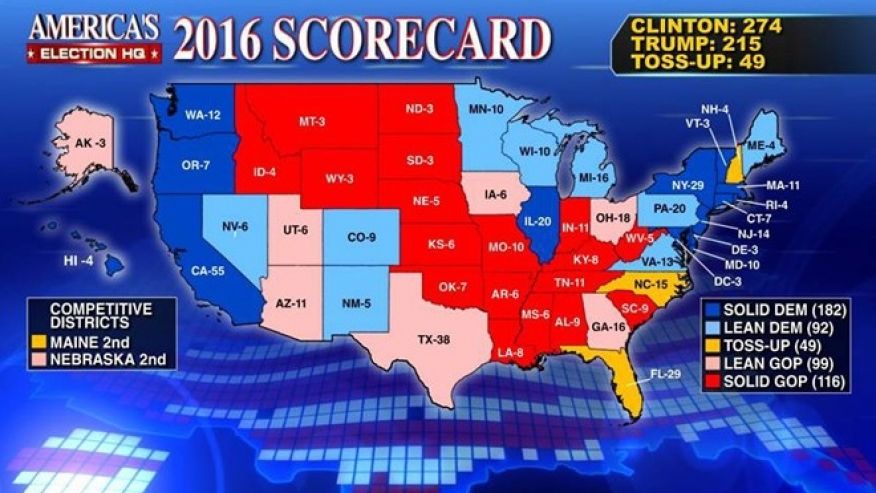 Trump is looking at a narrow – but expanding – path to 270, and he could win by snatching up the toss-ups and flipping at least one state currently seen as leaning toward Clinton.

The following updates were made Monday morning to the Fox News Decision Team’s ratings for key battlegrounds:

-Arizona changes from “toss up” to “lean Republican”

-Iowa changes from “toss up” to “lean Republican”

-Nevada changes from “toss up” to “lean Democrat”

-North Carolina changes from “lean Democrat” to “toss up”

-Utah changes from “toss up” to “lean Republican”

Maybe the media has been wrong, and Trump may actually pull this off. The one thought I have in my head is even though he could win, the fact that our country has fallen so far to make this election even close, considering all that Hillary has done is very sad. We may win this, but without any real changes, we will be back in the same position in four years. The decay of America is strong. Maybe we can change the outcome for the future with strong sound leadership…President Trump anyone?

Next Snapchat Is Turning Users Into Hillary Ahead Of Election Day