For months, direct conflict between Russia and the the United States seemed an unlikely possibility, but with the U.S. continuing their anti Russian sentiment over a rigged election, it may be more than likely.

Yesterday, NATO set up a plan to send over 300,000 troops to surround the Russians, a move that may be seen as a threat more than a “just in case” scenario.

FTP has the story: 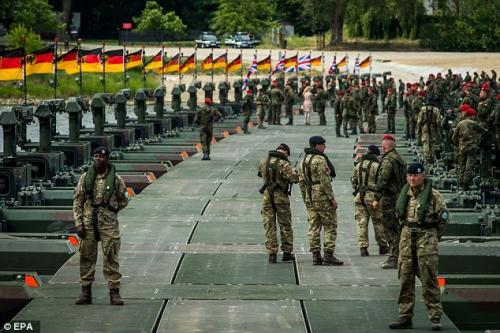 Eastern Europe — Continued anti-Russia propaganda just took a turn for the serious, as NATO scrambles to ready a massive force of 300,000 troops to be placed on ‘high alert’ amid U.S. panic Russian hackers could interfere in tomorrow’s presidential election.

This news follows several reports NATO plans to bring tens of thousands of troops to the border with Russia as soon as the beginning of next year.

Without unassailable evidence of any successful hacks by Russian actors, the United States has rushed to blame its Cold War foe for leaks of thousands of documents obtained and published by Wikileaks, which have nearly irreparably damaged the integrity of Hillary Clinton’s campaign.

Indeed, though both the Clinton camp and President Obama’s administration have continually blamed those leaks on Russian hackers hell bent on rigging the election — while simultaneously and unironically insisting the system isn’t rigged — no solid evidence has yet surfaced backing that allegation.

Nonetheless, at this late hour, NATO — often viewed as a puppet of the U.S. government — rushes to prepare troops for a putative threat Putin poses to paranoid Eastern European nations.

This, in response purely to continued scaremongering from U.S. officials about Russia purportedly seeking to influence and co-opt the election — again, despite a gaping void of credible proof.

“What’s really important about WikiLeaks is that the Russian government has engaged in espionage against Americans,” Hillary Clinton asserted at the third and final presidential debate in late October.

“They have hacked American websites, American accounts of private people, of institutions. Then they have given that information to WikiLeaks for the purpose of putting it on the Internet. This has come from the highest levels of the Russian government, clearly, from Putin himself, in an effort — as 17 of our intelligence agencies have confirmed — to influence our election.”

This assertion immediately fueled ridicule and condemnation from multiple officials and media organizations — including Wikileaks and, shockingly, left-slanted Politico.

“Clinton’s ‘17 US intelligence agencies’ may be the biggest, most immediately disprovable wopper ever intentionally made during a debate,” Wikileaks tweeted at the time.

In fact, those 17 agencies might declare the hallmarks of Russian hackers present in various caches of emails and documents, but as Politico noted, officials have only ever claimed those signatures were simply “consistent with the methods and motivations of Russian-directed efforts.”

In other words, U.S. intelligence surmised Russia performed the hack because it certainly seemed feasible.

But that threadbare assessment provided the impetus for American military hackers to penetrate sensitive Russian infrastructure in preparation to unleash malware rendering the nation impotent at the first sign of election interference — a chilling consideration given the precious little, if any, proof the U.S. required in its very justification for the move.