This Anonymous Activist was tired of potholes in the town and used a piece of chalk to make officials act AS FAST AS THEY POSSIBLY CAN!

They are calling this concerned citizen “Wanksy.” The local government was not doing a good job of taking care of the roads, so Wanksy launched a brilliant plan to motivate them.

Reportedly, there are roughly 12,000 miles of potholes on Britain’s roads. Damages to vehicles are estimated in the hundreds of millions, while citizens pay monthly Council Taxes and annual Road Taxes.

The government is clearly dropping the ball on road maintenance, though they are good at collecting taxes.

Enough potholes were enough, so, armed with a piece of chalk and an artistic flair, Wanksy sprung into action. 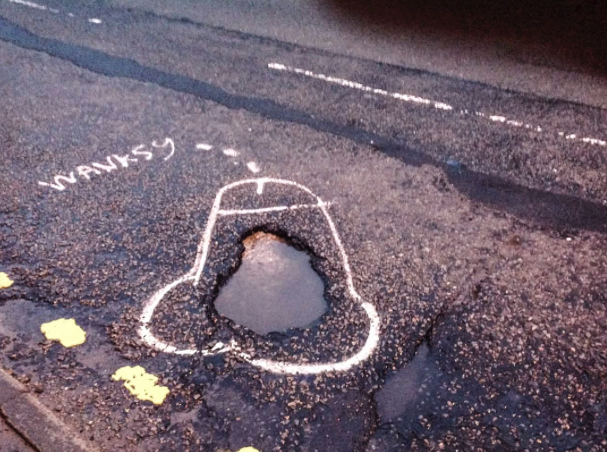 “I wanted to attract attention to the pothole and make it memorable,” Wanksy (who remains anonymous) told The Manchester Evening News. “Nothing seemed to do this better than a giant comedy phallus.”

The local governments, of course, have been trying to spin the issue to turn public perception against Wanksy and his artwork.

Seemingly, these genius public servants are overlooking the fact that “Wansky’s” sketches, using industrial chalk, are only short lived and wash away in several weeks.

Because of his efforts, Wanksy has earned a bit of worldwide attention.

“We need you in Madison, Wisconsin aka pothole hell,” wrote one Trans-Atlantic fan on “Wanksy’s” Facebook page.

First, there was Brexit. Then there was Wanksy. Now there is Donald Trump in The White House.

Brand new, effective-but-crude solutions are being implemented worldwide. Perhaps, Trump is right: It is a movement.

The Internet is making the world a smaller place, and genius finds a way to bubble to the surface.