In what looked to be an almost painful display, the first video of this historic meeting have surfaced looking anything but good.

After receiving an invitation to the White House by President Barack Obama, President-elect Donald Trump arrived at The White House for the first official meeting between the current and future Commanders in Chief. The meeting comes only 2 days after Trump was officially elected, beating Hillary in almost a landslide.

Unfortunately, Democrats and liberals are still in shock as protests continue around the U.S. Hillary was their only pillar of hope to carry on Obama’s legacy, a legacy that has failed immensely.

Mediaite has the story:

President-elect Trump received an honorary water salute at Laguardia Airport this morning in New York City by the Port Authority Police Department before taking off for Reagan National Airport in DC. 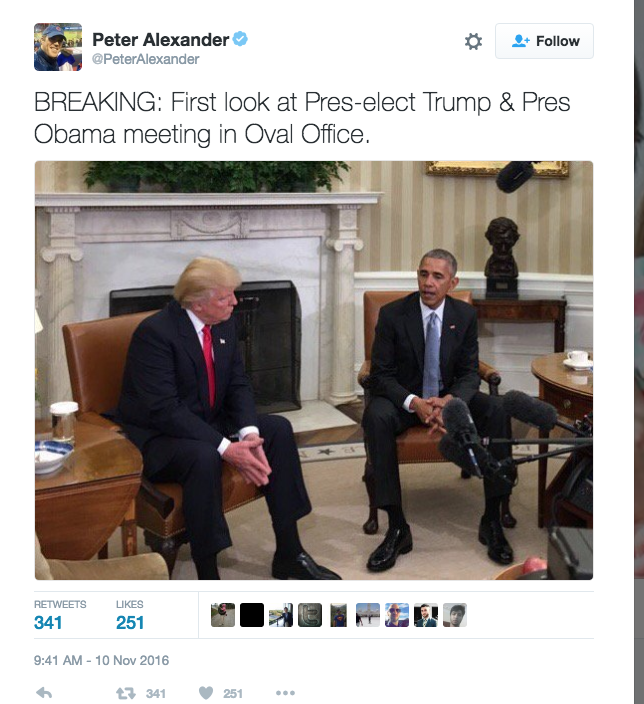 President Obama was joined by Vice President Biden yesterday, and spoke to gathered members of the press about the peaceful transition of power between the two administrations. “I had a chance to talk to President-elect Trump last night about 3:30 in the morning, I think it was, to congratulate him on winning the election and I had a chance to invite him to come to the White House tomorrow to talk about making sure that there is a successful transition between our presidencies,” he said.

He continued by highlighting the fact that although he and President-elect Trump may have some “significant difference,” President George W. Bush also had areas of disagreement eight years ago. But, as President Obama pointed out, 43’s team, “…could not have been more professional or more gracious in making sure we had a smooth transition so that we could hit the ground running.”