As the political correctness movement heats up and sweeps the nation, more crybabies call for the BAN of Thomas Jefferson’s words from his own university.

This demand comes from over 400 liberals who were offended by an email from the university’s president sent out quoting Jefferson right before the election. These liberal professors believe that Jefferson was not a good person to quote because of his “atrocities” against slaves.

A quick history lesson will show that Jefferson believed slaves should be free, but should also not be cast out without the proper tools to survive. “In 1779, as a practical solution to end slavery, Jefferson supported gradual emancipation, training, and colonization of African-American slaves rather than unconditional manumission, believing that releasing unprepared slaves with no place to go and no means to support themselves would only bring them misfortune”

How that equates to an “atrocity” is ridiculous and hardly deserves a ban in his own university.

Washington Examiner had this to say:

Just after the election, according to the Daily Cavalier, the school newspaper, President Teresa Sullivan emailed a note calling on students to create their own future.

“Thomas Jefferson wrote to a friend that University of Virginia students ‘are not of ordinary significance only: they are exactly the persons who are to succeed to the government of our country, and to rule its future enmities, its friendships and fortunes,'” Sullivan wrote. “I encourage today’s U.Va. students to embrace that responsibility.” 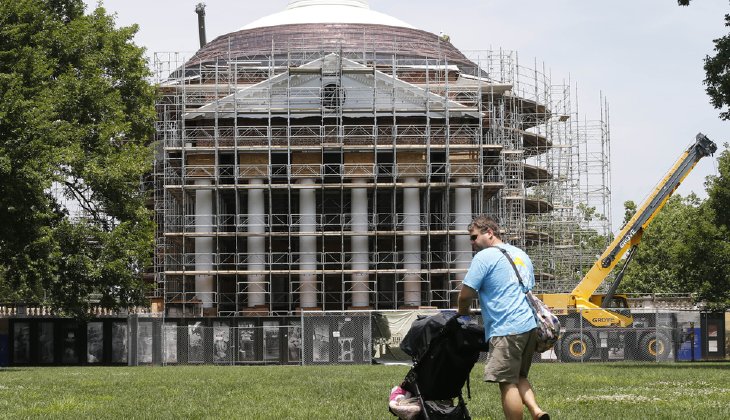 Some 469 professors and students signed a letter to Sullivan that said since Jefferson was a slave owner, he shouldn’t be quoted at the school he started.

“We would like for our administration to understand that although some members of this community may have come to this university because of Thomas Jefferson’s legacy, others of us came here in spite of it,” the letter read. “For many of us, the inclusion of Jefferson quotations in these e-mails undermines the message of unity, equality and civility that you are attempting to convey.”