Just weeks before leaving office, Obama managed to cram in over 527 pages worth of regulations in ONE day. This is the kind of thing Americans were worried about and fortunately, the House just passed a bill that can UNDO all Obama tries to pull in his final days, with a single vote.  Even that didn’t deter Obama though, this is the highest record of ALL TIME. I suppose it can’t be said he didn’t go out with a bang.

Trump is going to have his work cut out for him.

President Obama has just set a new record for rules and regulations, his administration spitting out 527 pages worth in just one day, as he races to put his fingerprint on virtually every corner of American life and business.

According to the Competitive Enterprise Institute, the administration has just shattered the old record for pages of regulations and rules published by the in-house journal, the Federal Register. 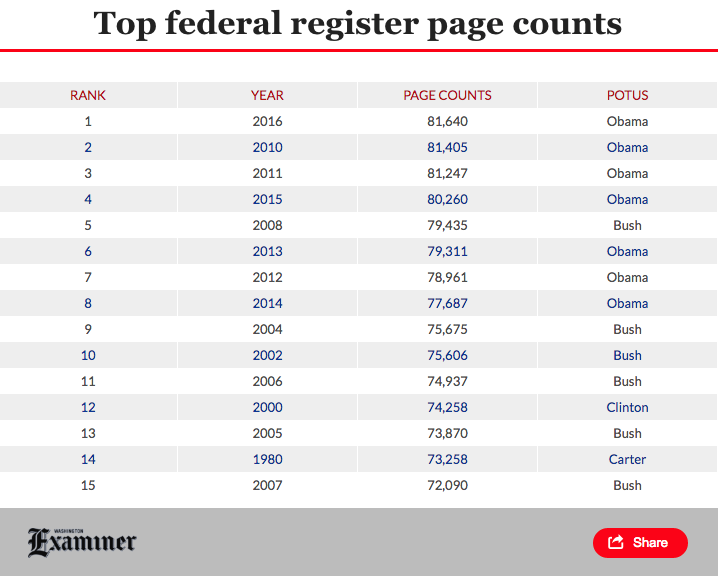 What’s more, there are still about 26 working days left in the year.

“This is astonishing and should be of great concern, and intolerable, to policymakers. It is remarkable enough that the all-time record has been passed before Thanksgiving,” he added.

Obama has promised to regulate by executive authority, but the sheer number of pages of regulations being rushed through is astonishing.


Previous Sheriff Clarke in Hot Water After Baby Dies in His Care, Inmate Sues for 8.5 MILLION

Next Planned Parenthood Paying Protesters 1500.00 a WEEK on TAXPAYER Dime