Hardly the time or place for a political rant but the cast of Hamilton decided to nail Pence after the show. The cast spoke their fear of not being protected by Trumps administration all the while completely missing what democrats have done to the black and african american population for decades.

Pence, who attended the play with his daughter Charlotte and his nieces and nephew, was greeted with both boos and cheers when he first walked into the theater. The booing became so disruptive at one point the performance had to stop.

The cast hopes the show had inspired Pence to uphold our American values and to work on behalf of all of everyone. Isn’t that what they have been saying all along? Obama was willing to work on behalf of some while taking the freedom of others, an inconvenient truth that apparently has been missed. This was clear harassment by singling out Pence in front of such a large amount of people. Not to mention the current climate of the nation makes this completely inappropriate, as pretty as the speech may have been.

Trump demanded that the cast of Hamilton apologize to Pence after they directly addressed him at the end of the show with a statement about their fears.

The president-elect, who took to Twitter on Saturday morning to complain, claimed the cast had ‘harassed’ Pence.

‘Our wonderful future V.P. Mike Pence was harassed last night at the theater by the cast of Hamilton, cameras blazing,’ Trump wrote. ‘This should not happen!’

‘The Theater must always be a safe and special place. The cast of Hamilton was very rude last night to a very good man, Mike Pence. Apologize!’

But the Hamilton cast began their address, which was delivered by actor Brandon Dixon, by thanking Pence for coming to the show.

Dixon, who plays Aaron Burr in the show, even told the audience there was ‘nothing to boo here’ and that the cast was ‘sharing a story of love’.

‘Vice president-elect Pence we welcome you and truly thank you for joining us here,’ Dixon said onstage.

Dixon then told Pence that the cast was a reflection of the Americans who were worried about their future following the presidential election.

‘We sir, we are the diverse America who are alarmed and anxious that your new administration will not protect us, our planet, our children, our parents, or defend us and uphold our inalienable rights,’ he said.

‘But we truly hope this show has inspired you to uphold our Americans values and to work on behalf of all of us. All of us.’

‘We truly thank you for sharing this show, this wonderful American story told by a diverse group of men and women of different colors, creeds, and orientations.’

Dixon was quick to defend the cast on Saturday morning, directly replying to Trump’s tweets.

‘Conversation is not harassment sir,’ Dixon wrote. ‘And I appreciate Mike Pence for stopping to listen.’ 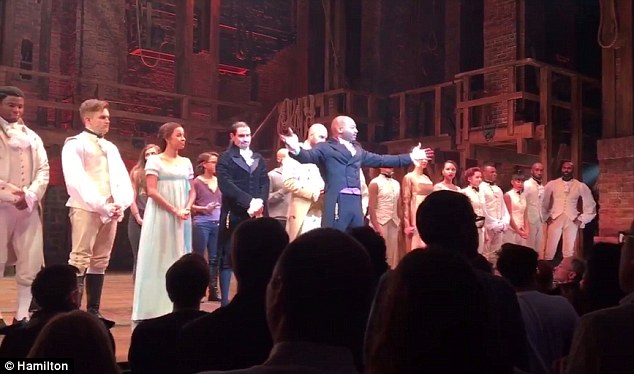 Vice-president-elect Pence we welcome you and truly thank you for joining us here,’ Brandon Dixon said on-stage in a message to Pence 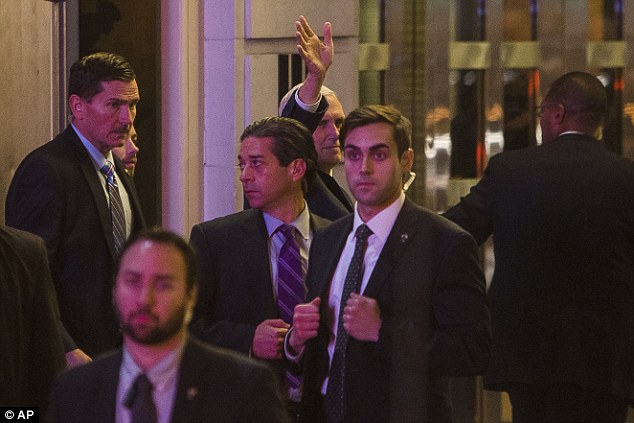 And just when Pence thought his embarrassment was over, he emerged from the theater to find a group of angry protesters shouting in the New York street.

Hundreds of demonstrators were seen outside chanting: ‘F*** Mike Pence.’

He then said Hamilton is a: ‘wonderful American story told by a diverse group of men, women, of different colors, creed, and orientation.