Jon Voight helped dozens of children to have a Thanksgiving dinner after the actor purchased turkeys for a complete stranger while in line at a Kentucky Walmart on Friday.

According to ABC News, the Oscar-winning actor was in line at the grocery store in Louisville when he noticed that the woman ahead of him, Sydney Gholston, was getting ready to purchase six whole turkeys ahead of the holiday this week.

“I was helping the lady scan the turkeys and the man behind me said, ‘You must have a big family. That’s an awful lot of turkeys,’” Gholston told ABC News. “I said, ‘I work at the Home of the Innocents.’”

Gholston — who works as the director of food and nutritional services at the nonprofit organization, which provides care to at-risk children and to children who have been victims of abuse — said she chatted with Voight for a little while before the actor offered to purchase all six turkeys for her.

“Very nice guy. He was very interested in what we did at the home. He said that was wonderful,” Gholston told ABC News.

Voight — who has made headlines over the past year for being one of Donald Trump’s most vocal celebrity supporters — was reportedly in town to shoot a movie. Gholston said she didn’t recognize the actor immediately, initially telling him he looked “a lot like Angelina Jolie’s dad.” 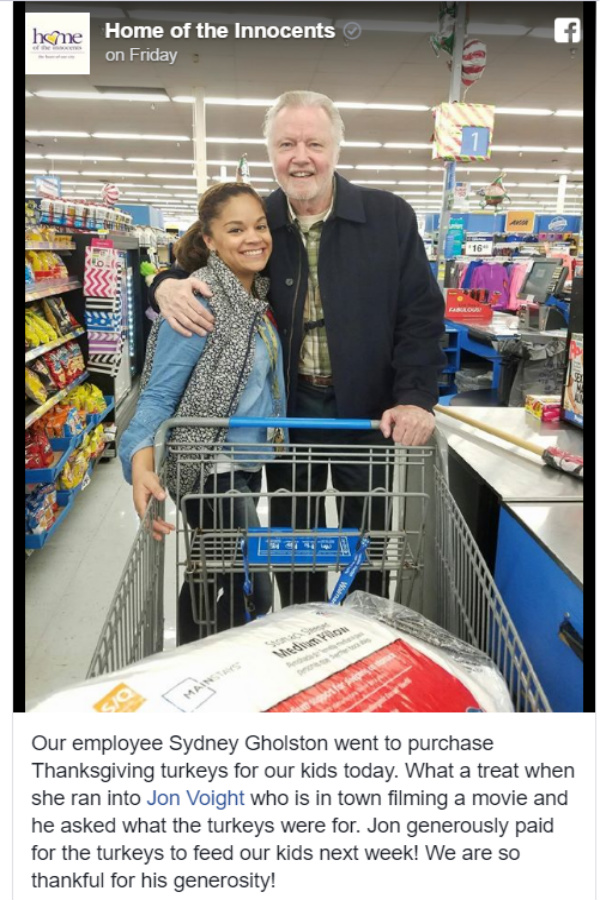 Next While Trump May Put NATO on ALERT Come January, Putin Moves Nukes Closer to Europe