Liberals continue to grasp at straws, that includes FAKING hate crimes and blaming it on Trump supporters. Just when you think they couldn’t get any lower, a collage student at North Park University sent herself “hate mail” after Trump won the election.

Just more proof that Hillary preyed on the dumbest of the bunch, liberal educated college students. At least the university did an actual investigation and didn’t let it go. The university’s president announced Tuesday the notes were a hoax, and that Volk is no longer enrolled at the university.

Read more: http://dailycaller.com/2016/11/23/another-trump-inspired-hate-crime-turns-out-to-be-a-hoax/#ixzz4QsDtg0dODC has the story:

An openly bisexual senior at North Park University claimed she was the recipient of a homophobic note and hateful emails following Donald Trump’s win in the presidential election. But the school president reported Tuesday the notes are “fabricated.”

Taylor Volk said she found a note taped to her door that read “Back to hell” and “#Trump” and included homophobic slurs following the election, as well as several anonymous emails with similar messages. She reported the messages on her Facebook, and spoke to the press about the incidents. “I just want them to stop,” she told NBC News last week. 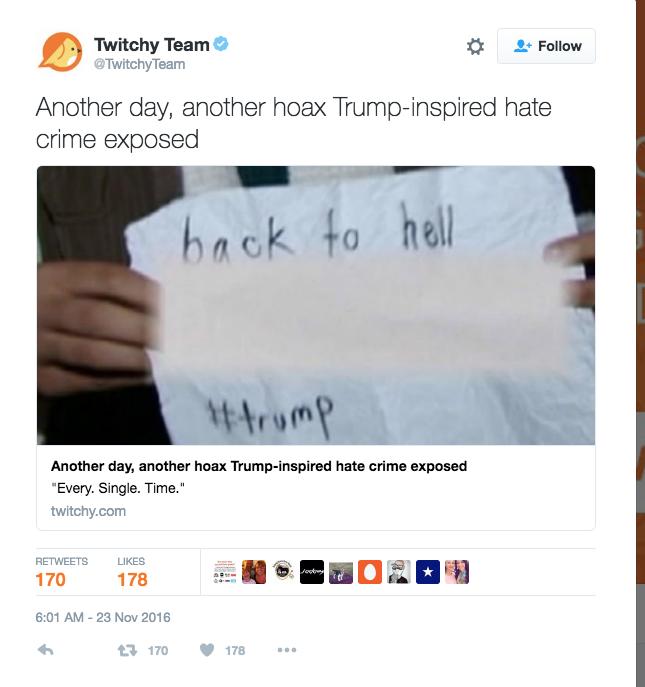