Now this isn’t something you hear about every day.

According to The Blaze:

Howard Brookins Jr. is the alderman for Chicago’s 21st ward, and one thing he isn’t a large fan of is the city’s “urban squirrels.” Brookins is known to speak out against the “aggresive” creatures for their destruction of the garbage bins around the city.

In October Brookins had denounced the Chicago’s furry tree-dwelling neighbors, saying that their chewing of the garbage bins was costing taxpayers $300,000.

“It’s a pet peeve. It does invoke some giggles. But we are spending too much money on replacing garbage carts because the squirrels continue to eat through ’em,” Brookins said during a city council meeting.


Apparently the squirrels were not going to take that lying down, as WaPo reports.

While he was biking down the Cal-Sag Trail on the 13th of November, one squirrel ran out in front of him and wrapped itself in the spoke of Brookins bicycle. This caused Brookins to flip over his handlebars and land on his head, fracturing his skull, breaking his nose, and knocking out a few teeth.

The alderman posted about the accident on his Facebook page. 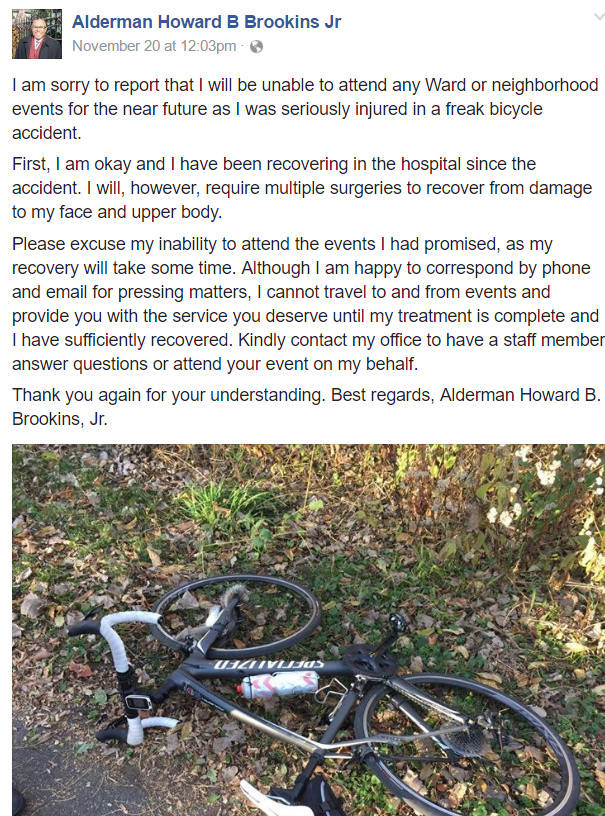 “I can think of no other reason for this squirrel’s actions than that it was like a suicide bomber, getting revenge,” joked Brookins later on.

The squirrel reportedly died, sacrificing himself in the name of his squirrel brethren.

That will teach him to go after the squirrel community! Maybe next time he will think twice before he opposes our woodland creature friends.