Donald Trump won the presidency outright in the electoral college, while losing the popular vote (by a somewhat significant margin as of now). And he admitted today he’s not a big fan of the system as it currently exists.

There is currently a petition on Change.org––pushed by celebrities like Lady Gaga––demanding that the electoral college overturn the results and make Hillary Clinton president. Now, the chances of that happening are infinitesimally small, but there are already some rumblings from electors who want their colleagues to step up.

In addition, there’s a piece in The Atlantic this week titled “The Electoral College Was Meant to Stop Men Like Trump From Being President.”

But on top of all that, Trump himself today admitted that he would prefer the popular vote system and thinks he would have done better under that circumstance: 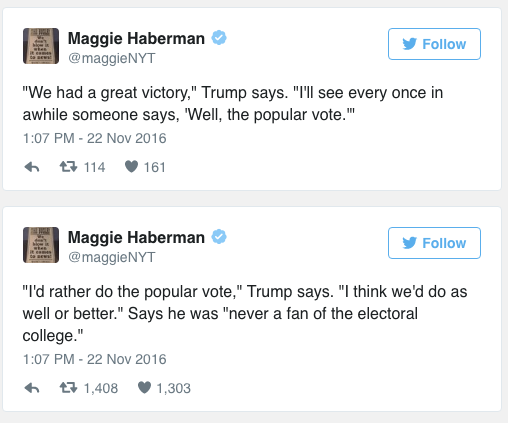 That being said, he did acknowledge the merits of the system:


Previous JUST IN: Anonymous Is Marching On Trump Tower To Annihilate 'Status Quo'

Next [Watch] Gov. Christie on Legalizing Marijuana: 'It's blood money!'