While Obama is acting all PROUD over what he seems to think was a seamless administration, he left out a few minor details. But don’t worry, we are all here to remind him of his failings till the day he dies. And from what I understand, he is never actually going away.

This week Obama claimed that his administration was never plagued by scandal like so many other administrations, and people actually believe it! Which is all quite laughable because HILLARY’S email scandal was one of them. Fortunately, there is still some good media out there doing their job, and they were able to find 11 scandals that rocked Obama’s administration.

Take a look and try not to laugh you ass off. 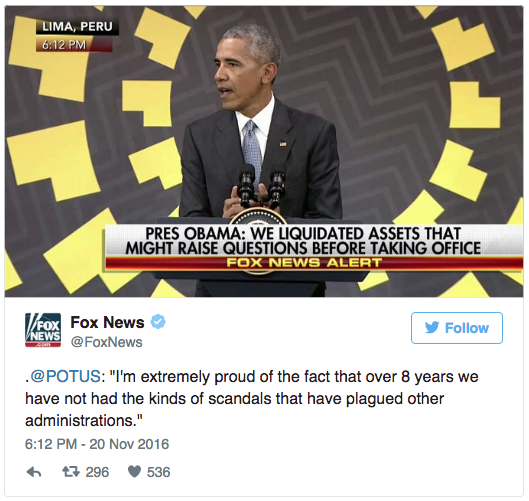 This is demonstrably false. Obama’s presidency has been mired with numerous scandals that would be blared on the news 24/7 if he were a Republican. But because he’s a Democrat, too many people buy Obama’s argument that his presidency has been scandal-free. Here are 11 of Obama’s scandals.

1. Operation Fast and Furious. This egregious example of a reckless government endangering lives and then scrambling to cover it up has haunted Obama for years. As Daily Wire has explained, “Operation Fast and Furious involved the Obama administration arming drug cartels and thugs south of the border as a means to undermine the Second Amendment. The program resulted in the death of U.S. Border Patrol agent Brian Terry. One of the Islamic terrorists in the Garland, Texas, attack also used a gun that was obtained through the Fast and Furious program.”

The attempt to cover up the fatal program resulted in Obama’s first AG being held in contempt of Congress:

Then-Attorney General Eric Holder was held in contempt of Congress for stonewalling investigations into Operation Fast and Furious, and President Barack Obama further stonewalled the investigations by wrongly asserting executive privilege.  On Tuesday, a federal judge threw out Obama’s executive privilege assertion on the grounds that the Justice Department “has already publicly revealed the sum and substance of the very material it is now seeking to withhold. Since any harm that would flow from the disclosures sought here would be merely incremental, the records must be produced.”

It has also been revealed that Joaquin Guzman, better known as the drug lord “El Chapo,” acquired a .50 caliber rifle as a result of Fast and Furious.

2. Benghazi. The terror attacks in Benghazi, Libya resulted in four brave Americans dying despite the fact that help could have been sent, but wasn’t. Requests for security prior to the attack were repeatedly denied, and after the attack Obama and Hillary Clinton falsely blamed it on a video considered offensive to Muslims. During the election, Benghazi became associated with Clinton—and rightly so—but it is also Obama’s scandal as well. It is still not known what Obama was doing that night.

3. The IRS targeted conservative organizations. In 2013, Lois Lerner, who directed the Internal Revenue Service’s Exempt Organizations Unit, admitted that Tea Party organizations were targeted under the agency, but blamed it on lower-level employees. Such organizations were heavily scrutinized with invasive questions. Since then, Lerner and IRS commissioner John Koskinen have denied any wrongdoing and have stonewalled congressional efforts to investigate the matter, citing computer crashes for being unable to turn over related emails.

Meanwhile, a federal court concluded in August that conservative groups might still be facing targeted scrutiny from the IRS. It has also been reported that the Department of Justice (DOJ) knew about the IRS’s targeting of conservative groups as early as 2011.

4. The DOJ seized Associated Press phone records as well as phone and email records from Fox News reporter James Rosen. In the AP’s case, the DOJ was investigating a story involving “a CIA operation in Yemen that foiled an al-Qaeda plot in the spring of 2012 to set off a bomb on an airplane headed to the United States,” according to the Washington Post. The DOJ seized two months of phone records from the AP without informing the news outlet.

“There can be no possible justification for such an overbroad collection of the telephone communications of The Associated Press and its reporters,” Gary Pruitt, president of the AP wrote to Holder at the time. “These records potentially reveal communications with confidential sources across all of the newsgathering activities undertaken by the AP during a two-month period, provide a road map to AP’s newsgathering operations, and disclose information about AP’s activities and operations that the government has no conceivable right to know.”

In the Rosen case, the DOJ was investigating a story Rosen did involving North Korea and tracked “his movements and conversations,” according to Fox News, including phone numbers belonging to Rosen’s parents. The DOJ had listed Rosen as a “co-conspirator” under the Espionage Act in regards to the story—allegedly pressing a source for classified information. Rosen was never charged with a crime.

Fox News executive Michael Clemente called the DOJ’s actions against Rosen “downright chilling.” “We will unequivocally defend [Rosen’s] right to operate as a member of what up until now has always been a free press,” Clemente said in a statement, per the Washington Post.

5. The NSA conducted mass surveillance against American citizens without a warrant. Thanks to leaking from former government contractor Edward Snowden, it was revealed that the National Security Agency had been conducting mass surveillance against American citizens—a clear violation of the Fourth Amendment. In 2015, the NSA eventually ended their bulk data collection of phone records.


Previous Obama's "LEGACY" Marred by Targeted Police Shootings, But He Has One Surprise Left