Popular Muslim-American comic Mohammed Amer, of the comedy trio Allah Made Me Funny, posted something on Facebook and Instagram that got a lot of attention. He was on a flight to Scotland with none other than Eric Trump and was chosen to sit next to the president-elect’s son for the whole time. 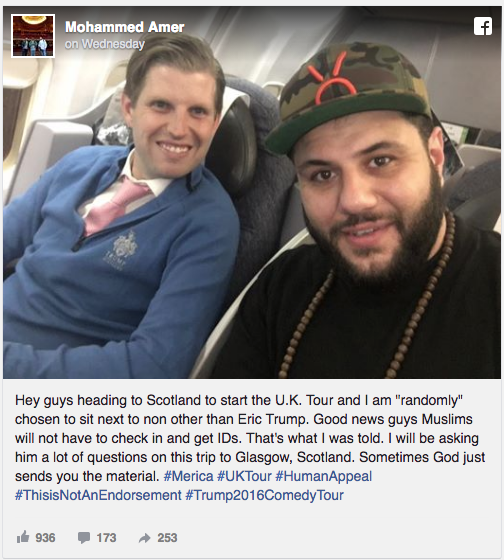 He wrote in his caption that he planned to talk to the businessman about his father’s administration and had already been assured that ” Muslims will not have to check in and get IDs.”

After Donald Trump proposed a ban on Muslims entering the country last year, his positions on Islam were widely criticized and followers of the religion became worried that they would be required to join a registry in his administration.

We have reached out to Amer to find out what, if anything, they discussed beyond that. We will update if we hear back.

At the very least, Eric Trump is probably grateful this photo doesn’t show him filling a water cup with lemonade, posing with a person in a t-shirt mocking his father, or just generally doing anything else that is likely to earn him online derision.

Next A Father's Love..."Got My Son's Scar Tattooed To Help His Self-Confidence."