An African-American couple from Texas just went viral by accusing International House of Pancakes of racism. They say that their IHOP server put an offensive slur on their receipt.

One little problem: the alleged slur was “BLACK PPL.” Another problem: The waiter who put it on there was black. 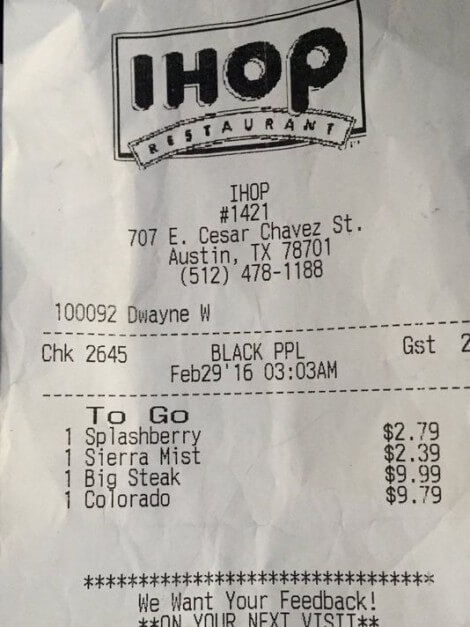 An Austin couple were shocked to find their IHOP receipt describe them as ‘BLACK PPL’.

Arainia Brown and her boyfriend Rolman Sparkman were traveling back to Austin early Monday when they decided to grab a to-go order from IHOP.

Around 3am the couple stopped at the IHOP at Interstate 35 and Cesar Chavez.

Brown who was the first to notice the receipt with the words ‘BLACK PPL’ typed at the top, immediately became upset.

She told KHOU that she felt sad and angry at the same time.

Brown said to make matters worse, the server was a young black man.

Sparkman told KHOU that being described that way on the receipt ‘is not a joke’.

He said that ‘it’s very serious and it hurt a lot of people’s feelings’.

Next [VIDEO] Daughter Finds Her Mom's “Death Notebook,” Shocked At What She Sees