As usual, liberal media is at it again and ruining the lives of good people by not telling the WHOLE STORY. Susan Olsen, who played little Cindy on the Brady Bunch, was recently fired from her US radio show after going on a “vile homophobic rant”. Sounds pretty bad right? What they of course failed to mention is the other half of this little Facebook tiff. Olsen was responding to an openly gay man who criticized her for her support of Donald Trump and she returned the rudeness back to him. Unfortunately, the delicate snowflake mentality is here to stay. Political correctness has turned people into a bunch of pansies with no backbone whatsoever.

This is just another perfect example of cowering to the liberal agenda. Openly gay actor Leon Acord-Whiting can appear on the show, knowing full well her beliefs, speak against her on Facebook, but the moment she responds, she gets fired. This was her personal FB account, not the companies, and he started it. Whatever happened to freedom of speech and expression?

The actress who played Cindy on The Brady Bunch has been fired from her US radio show after going on a vile homophobic rant.

Susan Olsen, who was a child star in the hit television show in the 60s and 70s, was stood down from LA Talk Radio on Friday after challenging a guest for not having “the balls to stand up to Cindy Brady”. 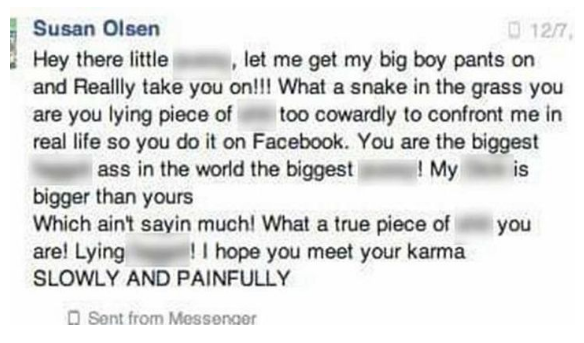 Acord-Whiting had remarked it was irresponsible to give Olsen, a fanatical Trump supporter, a radio show.

“She can spew her idiotic lies unchecked,” he said.

Olsen fired back in a private Facebook message, which Acord-Whiting later published online.

Next UK Ambassador EXPOSES WikiLeaks, 'I HAVE MET THE INFORMANT AND THEY ARE NOT RUSSIAN'