Do you believe these posts are racist?

Joel Husk, a police officer in Talledega, Alabama, was fired recently for two Facebook posts that were deemed “racist.”

One post showed a black and white picture of a battlefield with bodies fallen everywhere. The text said, “Over 620,000 white people died to free black slaves and still to this day not even 1 thank you.”

Take a look at this screenshot of the latter below: 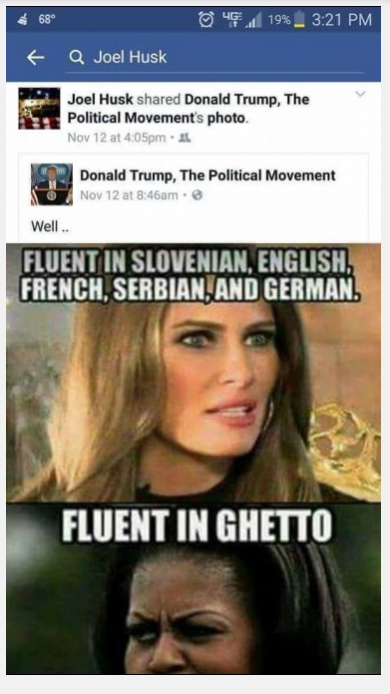 I understand why the posts may have been labeled as controversial, but racist?

“We will not tolerate that kind of conduct by any employees. We take very seriously our responsibility to treat everyone equally and equitably. We have to make sure we take steps for the community to trust us,” Bryant said.

There is such a double-standard in the media and in the government. Public servants like Joel Husk are constantly being accused of racism, while liberals, the Obamas included, spew anger and vitriol over the supposed bad behavior of whites at every opportunity.

Why is Husk considered a racist for a couple of silly Facebook posts while liberals in government get away with far worse on a regular basis?

Some of this is simply more “sign of the times” behavior. Liberals are in disarray after Donald Trump’s historic, unexpected win over Hillary Clinton, and in their emotional breakdown they are labeling everyone they see as “racist.”

Can you imagine if Trump cried racists every time someone disagreed with him?

Not likely to happen as it is not his style. He is too busy winning.