A member of the U.S. Army Honor Guard fainted while Barack Obama was delivering his farewell address to the Armed Forces Wednesday. 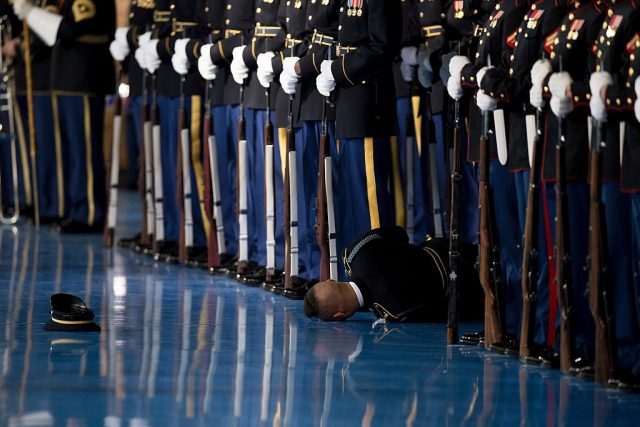 It’s unclear what happened to the guard.

The president praised Defense Secretary Ash Carter, General Joseph Dunford, General Paul Selva and Vice President Joe Biden during the ceremony. “Secretary Carter, I could not be more grateful for your gracious words, but more importantly, for your outstanding leadership, across, as you noted, more than three decades and nearly all of my presidency,” Obama said. “You have always given me, Ash, your best strategic counsel. You’ve made sure that we were investing in innovation for the long term and a strong Force of the Future.”

“As a physicist, Ash is also one of the few people who actually understands how our defense systems work. And I know that our troops and their families are immensely grateful for the compassion that you and Stephanie have shown them over the years. So to you and your family, on behalf of all of us, thank you for your outstanding service.”

“General Dunford, we’ve relied on you as Commandant of the Marine Corps, as our commander in Afghanistan, and now, as our nation’s highest-ranking military officer,” he continued.

“I thank you, and General Selva and the entire Joint Chiefs for the unvarnished military advice that you’ve always provided to me, for your dedication, for your professionalism, for you integrity. Because of you, because of this team, our Armed Forces are more integrated and better prepared across domains — a truly Joint Force. Which is why, as a White Sox fan, I can overlook the fact that you love the Red Sox. (Laughter.) Moreover, on a personal note, outside of your professional qualities, you are a good man, and I am grateful to have worked with you. And thank Ellyn for allowing you to do this.”

Next Man Who Raped and Murdered a 3-Year-Old Thought He Could Cheat the System, Get's What He Deserves