Jennifer Butler decided she wanted her very best friend to be her maid of honor at her wedding.  Little did she know what she was in store for.  The wedding itself went off great and the bride and groom shared a piece of their wedding cake and shred their first dance as husband and wife. 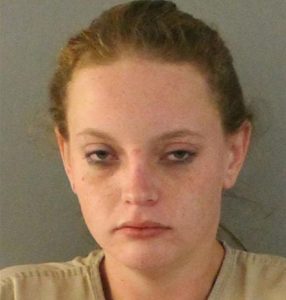 But when they broke out the liquor at the reception, everything went downhill fast.  Within 20 to 30 minutes Willis had downed almost an entire bottle of Fireball and was drunk on her ass.  She began asking people for their car keys and naturally they said no.  She then went up to the best man, who incidentally was the groom’s brother, stuck her hand in his pocket and stole his car keys.  She jumped into his car, put it in reverse and almost ran the best man over.  When she began going forward, she was dragging him down the road.

He was finally able to stop her by using his E-Brake.  She was escorted back to the party where she declared war on a bottle of Captain Morgan and she was winning.

Amazingly, until this point, police still weren’t involved. What happened next ensured that Butler’s wedding would include sirens and handcuffs.

Templeton says that Willis turned on him and, “cracked me upside of the face.” Surprised, he adds that he responded by hitting back without thinking. The fight brought in local deputies, who arrested Willis.

That still wasn’t the end of the maid of honor’s path of destruction. After deputies arrived, Willis began shaking and claimed she was experiencing an asthma attack. When authorities took her to a local hospital, she assaulted the medical staff, kicked a bed pan, and “exposed herself,” to the deputies.

Butler probably regrets her choice for maid of honor, which one guest called “a bad decision.” She says she and Willis are no longer friends.