She has a history of making wild bets but this time she paid up!

Last year, this college girl named Peyton Darnell promised the world that she would get a “lock her up” tattoo on her posterior if Donald Trump one. The saga of that promise is ongoing, and we will report more of that in a few minutes, but, at the moment, we can say that we are happy about a promise that Peyton did keep: She got the Clemson tattoo she promised after the National Championship Football game.

Back in August, Peyton promised an ass tat if Clemson actually won it all, through a tweet:

Unlike the Hillary Clinton promise, Peyton ponied up for Clemson.

Evidently, Peyton is a little worried that her family will be upset with her.

Im a disgrace to my whole family (sorry) go tigers !!!!

Her dad does not seem to be too upset though.

My dad doesn’t hate me just for the people commenting that I have daddy issues!!! pic.twitter.com/3oOL5iAHkJ

Peyton did post pieces of other pictures but, bizarrely, she has pulled them down. Here is an example: 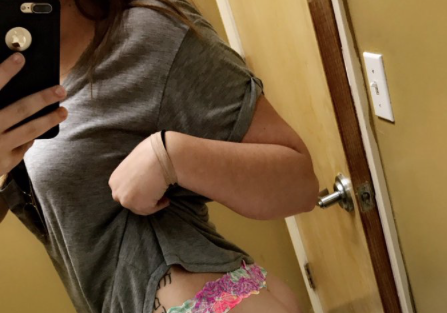 So, what is to come of the Hillary Clinton, lock her up tattoo? Peyton once said that she did not have the money to get the Hillary one.

@peyton_darnelll People will donate to you. Trust me.

Later, she announced a GoFundMe account to raise funds.

The night of the election, I tweeted “I will literally get a “Lock Her Up” ass tat if Trump can pull this off”. Sure enough, Trump pulled off.

I forgot about the tattoo promise until Busted Coverage released an article about my tattoo. I have $1.96 in my bank account, but people have offered to pay for it if I created a gofundme. And after being called out by BC, i can’t let it go.

Any amount donated past what it costs to pay for the tattoo will be donated to Operation Homefront, a veteran nonprofit that provides assistance to veterans and their families.
Help spread the word!

We have our doubts about the Hillary tattoo, but we are happy to see a Trump supporter doing well!

Next Clemson Coach Dabo Swinney on CFP Win: "Only God Can Do This" [VIDEO]