And they called it puppy love
Just because we’re in our teens
Tell them all, please tell them it isn’t fair
To take away my only dream

But that’s just what the police did. 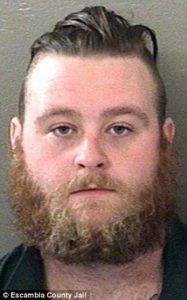 Bradley Jean Hubbard was arrested after someone close to him contacted authorities and reported the abuse that is now being called one hundred times over a three year period.    The dog is named Baby Girl, a pit bull.  The relative said she was able to see the abuse take place because there is a hole created by Hubbard during a violent rampage.

The witness said the dog would cry and whimper in pain at first but would later settle down as the abuse continued.  If his area is liberal, he could get off because as we all know “Love Wins.”  That’s why I started a rumor that Hubbard would give the dog a cigarette after sex and that he refused to take his lover to Planned Parenthood for contraceptives.  That should get him hung.


He hasn’t been charged yet but it is expected that he will either face engaging in sexual acts with an animal and causing the pain, suffering, or death of an animal charges or both.  Maybe he can tell the judge he is a Syrian refugee.

This is a heinous crime and he should get a nice STIFF sentence, doing HARD time.

Next Racist John Louis A Hypocrite on "Not a Legitimate" President