John Lewis supported Hillary Clinton for president.  He would have been happy to see her win and would have defended her to the death over charges of not being legitimate.  Her face may be white, but her heart is as black as coal, so naturally the racist would defend her. 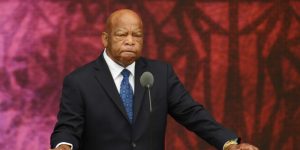 Look at the facts.  Lewis claims that Hillary lost because the Russians released all this information about her and the DNC.  That charge is not proven and several facts have already turned out to be fabricated.  But for the sake of argument, let us agree that the Russians did everything they say they did.  What did they really do?  They released documents and emails that showed the Hillary campaign, the media and the DNC are all corrupt.  No one disputes the authenticity of the documents or what they contain.

Now, lwt’s examine what Hillary and the DNC did to interfere with the election.  First, they scheduled the debates when few people would be watching, which is good because Bernie cleaned her clock in all of them.  They blocked Bernie’s campaign from the DNC site. They fed her debate questions before the debate, which she quickly embraced. The DNC interfered in the primaries with Hillary’s blessing.

In the general election, Hillary’s team planned several dirty tricks against Donald Trump, all fake.  All of the women who came forward had ties to Hillary’s campaign.  Yet, every single one of them dropped their suits right after the election.  Who paid for these lawyers who definitely would not take these cases on contingencies.  And finally, she worked with Ukraine to interfere in the election.


Previous And They Call It Puppy Love, But the Police Call It a Crime